The U.S. Army Corps of Engineers, responsible for navigation safety in the Straits of Mackinac, should forgo a rubber-stamp permitting process favored by the State of Michigan and instead conduct a full review at the federal level of Enbridge’s latest proposal to redesign Line 5 using dozens of anchor supports on the lakebed, according to leading citizens groups who filed a formal request today with the agency. 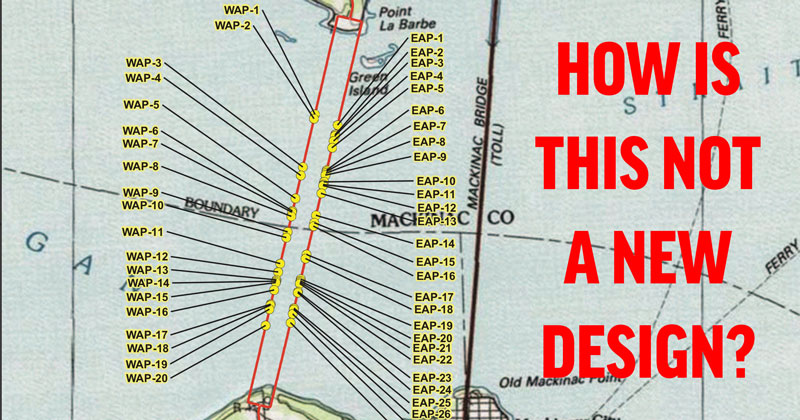 In a letter to the Army Corps,  13 organizations today requested a public hearing and full environmental review that includes alternatives to Enbridge’s proposal to install an additional 48 anchor supports in the 4.5 mile Straits pipeline which has been plagued with problems.  In April, a ship’s anchor deployed by a vessel dented Line 5 and Enbridge has failed to disclose the full damage of that anchor strike.

“What we know for sure is that additional anchor supports already installed by Enbridge have damaged the pipeline,” said Liz Kirkwood, Executive Director of FLOW.   “We need to take a much closer look at Line 5 than what the state and Enbridge have been willing to do.”

Both the Michigan Department of Environmental Quality and Army Corps must approve a permit for the anchor supports, which would total 198 installed since 2003.  Strong currents and a shifting lakebed create constant washouts in the Straits, imperiling the 65-year-old pipeline.   Line 5 under the Straits operates under a 1953 easement agreement with the State of Michigan, which Enbridge has violated numerous times.

“We need to take a much closer look at Line 5 than what the state and Enbridge have been willing to do.” - Liz Kirkwood, Executive Director of FLOW

“These supports create a suspended pipeline, and are potential magnets for vessel anchors to hook the pipeline, posing a real danger,” said Leonard Page, chair of the Straits of Mackinac Alliance.  “What Enbridge is attempting to do through the back door is put into place a patchwork redesign of Line 5 without a real examination of any other alternatives.”

Enbridge successfully doubled the capacity of Line 6B(78) from Stockton to Sarnia after a disastrous tar sands spill without an environmental review by replacing it in segments and now wants to do the same through the Straits of Mackinac, which has been described as the worst possible place for an oil spill in the Great Lakes.

“This will create a whole different pipeline in the Straits,” said David Holtz, Sierra Club Michigan Chapter Conservation Chair.  “Enbridge has never conducted a comprehensive engineering study to evaluate the water’s currents and the additional stresses on Line 5 with the addition of 198 anchors both bracing and elevating it off the lakebed floor.  The Army Corps’ mission supports a comprehensive review and it has a duty to protect the Great Lakes and navigation.”

Said the citizens groups in their letter to the Army Corps:  “These anchor supports that are being requested were not intended to be used on Line 5 in its original design, and were not used on Line 5 for the first few decades of its operation. Enbridge has known since at least 2014 that the anchor supports are causing coating and raw metal loss and exposure to the pipeline, yet they persist in advocating for this design as mere maintenance—partially in order to prevent any changes or updates to the pipeline from being viewed as new construction, which would trigger a full environmental review of the entirety of Line 5. “