As Line 5 Pipeline Board Meets Today, Only One Advisor Counts with the Governor: Enbridge

Today’s meeting of Gov. Snyder’s pipeline advisory board is a distraction from decisions about the pipeline’s future that are actually being made between Snyder and Enbridge, with support from Attorney General Bill Schuette. A coalition of groups leading a citizen campaign to decommission Enbridge’s Line 5 oil pipelines in the Mackinac Straits cited last year’s closed-door agreement between Snyder and Enbridge as evidence.

The 15-member Pipeline Safety Advisory Board that is meeting today at a Lansing hotel has been ignored by Snyder, who bypassed the board’s and a public process to cut a deal behind-the-scenes in September with Enbridge that will leave dangerous, aging oil pipelines as a continuing threat to Michigan waterways. Snyder is expected to announce by next month an up to seven-year Line 5 construction project in the Mackinac Straits that will leave the existing troubled 4.5-mile underwater segment exposed to anchor damage, continued corrosion and elevated using an experimental pipeline support structure that has likely altered its engineering design.

“Snyder is playing the role of a political magician who wants the public to focus on a weak and demoralized pipeline advisory board while he and Enbridge work out the future of the Great Lakes behind the curtain,” said Sean McBrearty, Oil & Water Don’t Mix campaign coordinator. “Snyder’s cozy relationship with Enbridge has put the interests of a Canadian oil transport giant ahead of the vast majority of Michigan residents who understand that protecting the Great Lakes should be a Michigan governor’s top priority.” 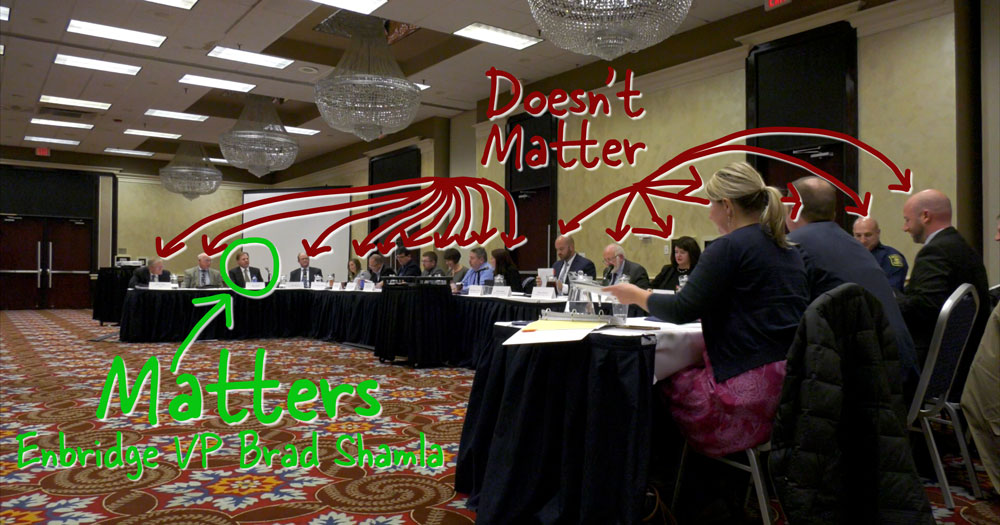 Bridge Magazine and the Michigan Campaign Finance Network, emails obtained through the Freedom of Information Act show that the Snyder administration has allowed lobbyists and officials with direct relationships to Enbridge to offer extensive input about the fate of the Line 5 pipeline. The aging pipeline has leaked at least 1.1 million gallons of oil on 29 occasions and suffered from corrosion and loss of structural support in the turbulent Straits lakebed. Line 5 spills haven’t occurred yet in the Mackinac Straits but in April the pipeline sustained anchor damage that alarmed observers concerned about a potential catastrophic pipeline rupture.

“Snyder’s cozy relationship with Enbridge has put the interests of a Canadian oil transport giant ahead of the vast majority of Michigan residents who understand that protecting the Great Lakes should be a Michigan governor’s top priority.” - Sean McBrearty, Oil & Water Don’t Mix campaign coordinator

In addition, recently disclosed documents obtained by Oil & Water Don’t Mix show that Attorney General Schuette and Enbridge also have close ties. A review of Schuette’s official appointment calendar, disclosed through a Freedom of Information Act request, show that Schuette has infrequently met with citizens and environmental groups about Line 5 but on at least nine occasions through calls or in-person meetings he has made himself available to Enbridge, Enbridge’s lobbyist and oil industry officials over a 25-month period beginning in February 2015 when Schuette was co-chairing a task force investigating Enbridge Mackinac Straits pipeline. The meetings took place between Feb. 5, 2015 and March 7, 2017 and at various times involved Enbridge Lansing lobbyist Tom Hoisington, Enbridge officials and the Michigan Oil & Gas Association. At the same time that Enbridge had Schuette’s ear, the attorney general was reassuring the public that Line 5 would be decommissioned, saying its “days are numbered.” Schuette has since lined up with Snyder in support of keeping Line 5 in the Mackinac Straits indefinitely.

“Citizens who serve on the pipeline board should be congratulated for their patience as the governor who appointed them has rejected their role as advisors, instead partnering behind closed doors with Enbridge,” said McBrearty. “Asking for their input after all the important decisions have been made may seem like clever public relations to the governor, but Michigan citizens know that when you lift the veil only one advisor counts with Rick Snyder and Bill Schuette and that’s Enbridge.”