Snyder, Schuette asked to shut down “Line 5” over easement violations

Citing new research and documentation revealing cracks, dents, corrosion, and structural defects in the twin oil pipelines in the Mackinac Straits, 22 environmental and tribal groups, plus Patagonia today formally requested that Gov. Snyder and Attorney General Schuette shut down “Line 5” oil in the Straits based on Enbridge’s multiple easement violations.

The violations mean Enbridge is operating illegally and has broken its legal agreement with the state and people of Michigan.

Enbridge’s ongoing violations related to pipeline design threaten the very safety and health of the Great Lakes, and thus trigger the state’s duty to enforce its agreement with Enbridge. Under the 1953 easement, the state must provide Canadian-based energy transporter Enbridge 90 days to resolve any known easement violations. The state now has substantial legal and factual cause to terminate the agreement with Enbridge to stop the oil flow and protect the Great Lakes, public water supplies, and the Pure Michigan economy, according to an April 13 letter to Snyder and Schuette, signed by partner groups in the Oil & Water Don’t Mix campaign.

“The law and this easement agreement are clear: state leaders cannot wait another year or more while Enbridge continues to violate safety conditions it agreed to and withholds safety inspection and other data from the public and the state,” said environmental attorney Liz Kirkwood, Executive Director of FLOW (For Love of Water) in Traverse City. “Gov. Snyder and Attorney General Schuette must start the clock to terminate the state’s easement agreement that allows Enbridge to operate the Line 5 pipelines on state-owned bottomlands and waters.”

“The law and this easement agreement are clear: state leaders cannot wait another year or more while Enbridge continues to violate safety conditions it agreed to and withholds safety inspection and other data from the public and the state." - Liz Kirkwood, Environmental Attorney, Executive Director of FLOW (For Love of Water)

In their letter, the groups identified eight specific violations of the easement and state law, including: 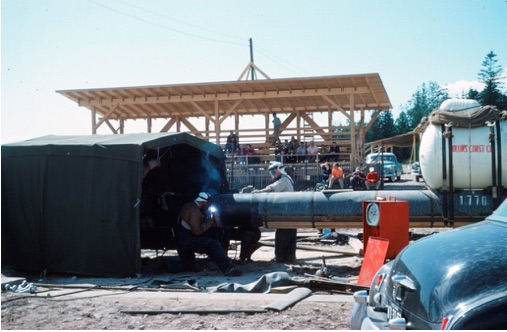 The twin Enbridge Line 5 oil pipelines lying exposed in the Mackinac Straits, where Lake Michigan and Lake Huron meet, are a high-risk shortcut moving up to 23 million gallons of oil and propane a day primarily from western Canadian oil fields to 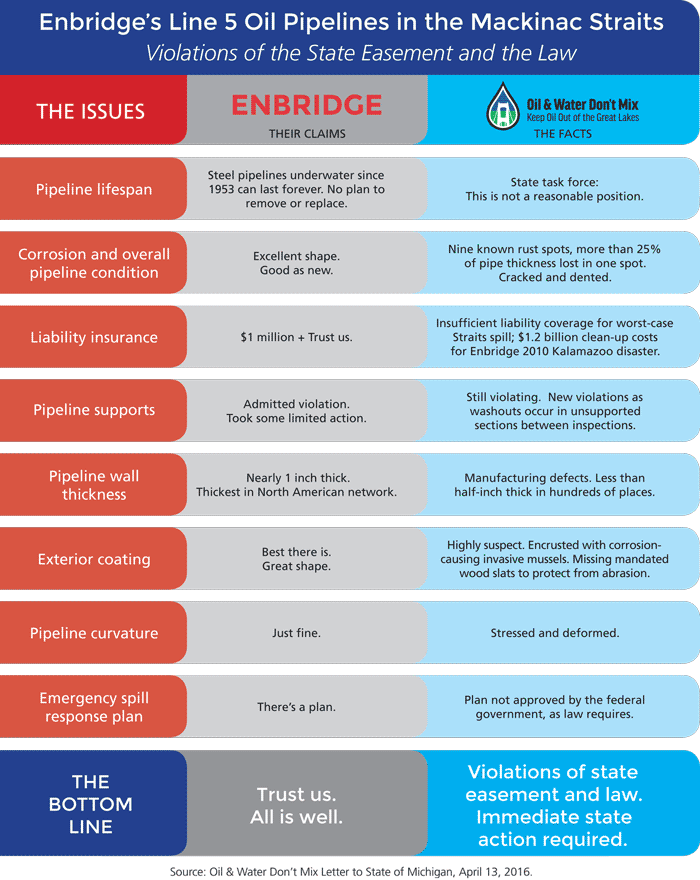 eastern Canadian refineries, as well as on to Montreal and export markets. FLOW’s research shows there are alternatives to Line 5 that do not threaten the Great Lakes, which hold 20 percent of the world’s fresh surface water, and do not disrupt Michigan’s oil and gas supply.

“For six decades and counting, these pipelines lying exposed in the Straits have lacked the required supports and wooden-slat covering,” said Ed Timm, PhD, PE, a retired chemical engineer and former senior scientist and consultant to Dow Chemical’s Environmental Operations Business, who advises the Oil & Water Don’t Mix campaign. “The result, according to my research and Enbridge’s own data, is that the pipelines are stressed, dented, deformed, abraded, cracked, and corroded. It adds up to an imminent risk of failure, in direct contrast to the company’s extensive marketing campaign."

Dozens of local communities and organizations, hundreds of businesses, and thousands of individuals and families support efforts by the Oil & Water Don’t Mix campaign to prevent a catastrophic oil spill by stopping the oil flowing through Line 5 in the Mackinac Straits, which University of Michigan experts have called the “worst possible place for an oil spill in the Great Lakes.” Enbridge has a long history of oil spills from Line 5, which runs from Superior, Wisc., to Sarnia, Ont., and is responsible for 2010’s million-gallon oil spill disaster into the Kalamazoo River that cost $1.2 billion to clean up to the extent possible.

"...the pipelines are stressed, dented, deformed, abraded, cracked, and corroded. It adds up to an imminent risk of failure, in direct contrast to the company’s extensive marketing campaign." - Ed Timm, PhD, PE, a retired chemical engineer and former senior scientist and consultant to Dow Chemical’s Environmental Operations Business

“I think pipelines are the safest way to transport oil, but because of the conditions of the Straits and the age of the pipelines, it is past time for an independent analysis to ensure the safety of this line for the citizens of Michigan,” said James Tamlyn, Chair of the Emmet County Board of Commissioners, which passed a resolution in December calling on the Snyder administration to shut down Line 5 in the Straits of Mackinac. “There’s one thing we all agree on and that’s the importance of protecting our clean water. It defines us and without it, our communities and businesses would be wiped out.” 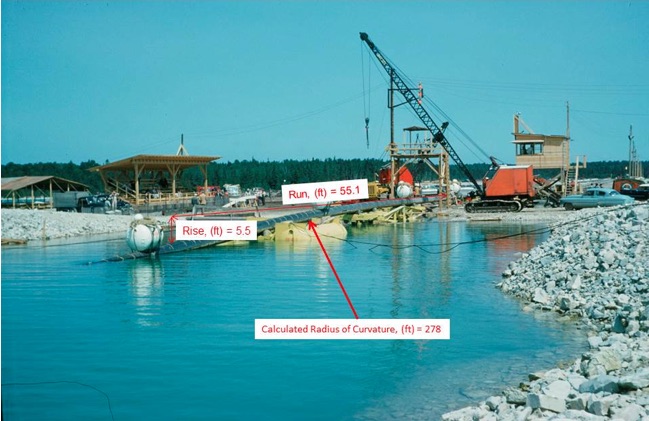 - To date, more than 30 cities, villages, townships, and counties across Michigan have voted to call on the governor and attorney general to stop the oil flowing through the Straits, including Mackinac Island, Mackinaw City, and the cities of Cheboygan, Petoskey, Charlevoix, and Traverse City. Dramatic new research from the University of Michigan released in late March shows an Enbridge oil pipeline rupture in the Mackinac Straits could impact more than 700 miles of Lake Michigan and Lake Huron coastlines, as well as more than 15% of Lake Michigan’s open water and nearly 60% of Lake Huron’s open water.

“The effects of an oil spill in the Mackinac Straits would have catastrophic consequences for our area and for all Michiganders for years to come,” said Bobie Crongeyer, a community leader with Straits Area Concerned Citizens for Peace, Justice & the Environment, which has advanced resolutions to shut down Line 5 in many communities. “Tourists will find other places to vacation, while we will be left with the devastation that Enbridge leaves behind, including a poisoned fishery and drinking water supplies and a shattered economy.”

Read the letter, signed by 22 environmental and tribal groups here