The federal court decision announced today finding that major weaknesses in the current spill response plan for Enbridge’s Line 5 oil pipelines under the Great Lakes violate the law is another blow to the controversial pipeline and unequivocal evidence that Michigan cannot trust Enbridge or federal regulators and must act with urgency to protect the Great Lakes.

There is a pattern and practice by Enbridge of operating outside the law. If Line 5 in the Mackinac Straits ruptures today the court’s decision makes clear we cannot trust Enbridge and their response plans to protect the Great Lakes from a catastrophic oil spill. 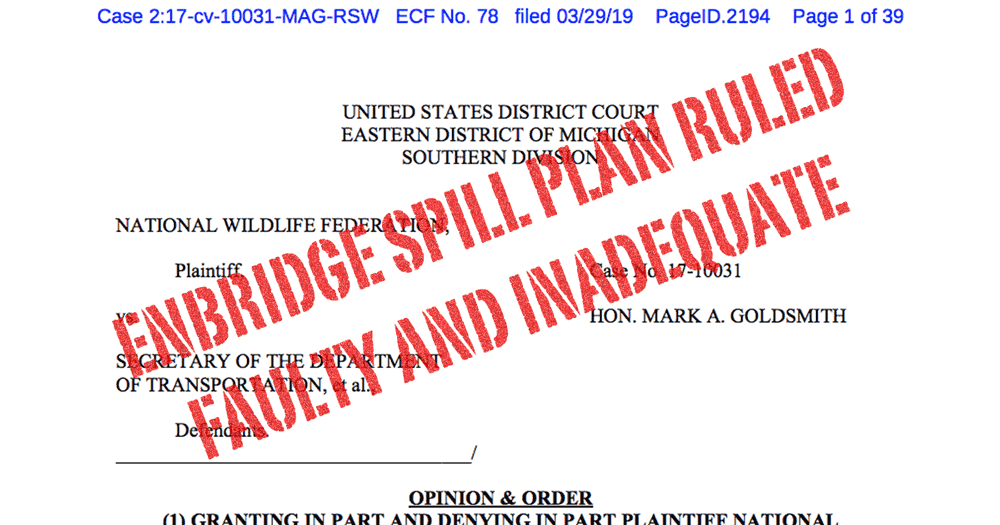 Judge Mark Goldsmith of the U.S. District Court for the Eastern District of Michigan, ruling Friday in a case brought by the National Wildlife Federation, wrote that an oil spill in the Mackinac Straits “poses a significant threat to Lake Michigan and Lake Huron” and that Enbridge’s oil spill response plans for Line 5 were faulty and inadequate. Judge Goldsmith said Enbridge’s plans do not adequately account for potential impacts of a pipeline rupture to wildlife and the environment.

Enbridge's Line 5 oil tunnel plans for the Great Lakes were put on hold last week by Gov. Gretchen Whitmer after Attorney General Dana Nessel issued an opinion finding a hastily passed law during the 2018 lame duck legislature was unconstitutional. With this federal court ruling raising major questions about Enbridge oil spill response plans, there can be no question that state officials must immediately act to begin decommissioning Line 5.