Leaders of the Oil & Water Don't Mix campaign to protect the Great Lakes from oil pipelines praised actions by Gov. Whitmer today on Line 5 in response to an attorney general’s opinion and urged her to move quickly in decommissioning Enbridge’s troubled Line 5.

Attorney General Dana Nessel’s comprehensive, detailed legal analysis requested by Gov. Whitmer concluded that in the lame-duck legislature’s haste to enact Public Act 359 during the closing days of the 2018 session it committed many fatal flaws when drafting the legislation. Attorney General Nessel also concluded related agreements for a Line 5 oil tunnel should be voided along with Public Act 359. In response, Gov. Whitmer issued an executive directive halting state agencies from moving forward on a proposed Enbridge Line 5 oil tunnel. 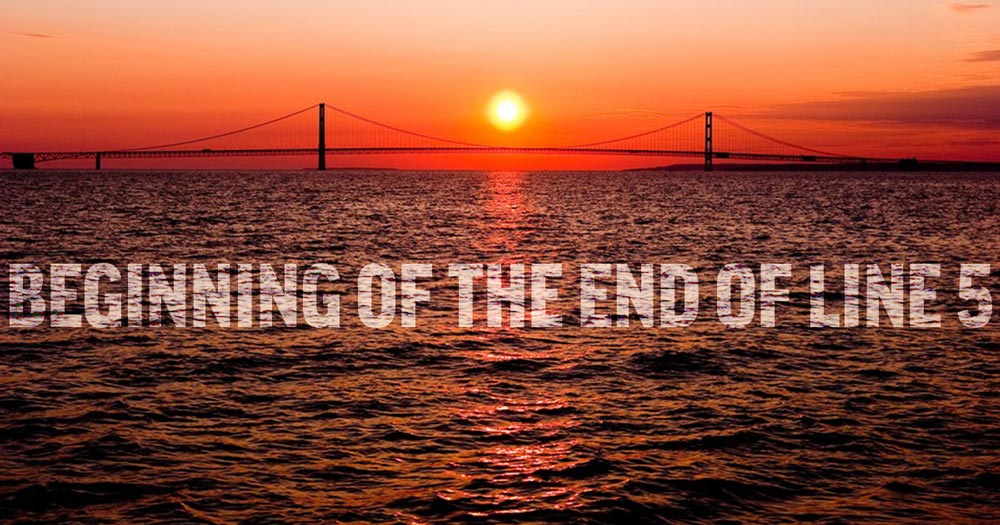 “The backroom deals creating Enbridge’s proposed oil tunnel couldn’t survive public scrutiny and now we know they can’t survive the rule of law,” said Liz Kirkwood, Executive Director of FLOW (For Love of Water). “It’s time to focus on Michigan’s true energy future and protect Michigan’s Great Lakes and our economy from a Line 5 pipeline rupture. The path forward for Michigan is for Gov. Whitmer to immediately begin the process of decommissioning Line 5 in the Straits of Mackinac.”

“By upending the Enbridge sweetheart deals struck by former Gov. Snyder, Attorney General Nessel is protecting Michigan from horrible agreements that only benefit Enbridge,” said Sean McBrearty, campaign coordinator for Oil & Water Don’t Mix. “The attorney general is rightfully wiping the legal slate clean and now Gov. Whitmer has the opportunity to put Michigan on a path that doesn’t lead to a disastrous outcome for the Great Lakes and Michigan. Her decision to halt all Line 5 activity is a significant and appropriate step forward and has our full support.”

Give now to counter the Enbridge media blitz that is sure to come. Help OWDM spread the truth about Line 5.

Previously Gov. Whitmer asked the Michigan Public Service Commission to focus on Michigan’s energy infrastructure and issue an iniitial report by July. As part of a plan to decommission Line 5, Gov. Whitmer should make sure that the public service commission includes a focus on the energy needs of Upper Peninsula residents.

“Studies have shown that Line 5 is not critical energy infrastructure for Michigan, including the UP,” said Anne Woiwode, Chair of Sierra Club in Michigan. “The public service commission report can be an important tool to point the way to both short and longer term energy solutions for the UP, including alternatives to using Line 5 to transport natural gas liquids used to produce propane.”

The Straits of Mackinac Alliance, a group challenging the state permits that allow Enbridge to add 200 anchor supports to buy more time for the 66-year-old Line 5 pipeline, which is well past its expected lifespan, said it is past time to pull the plug on Enbridge’s ticking time bomb.

"It’s time to focus on Michigan’s true energy future and protect Michigan’s Great Lakes and our economy from a Line 5 pipeline rupture. The path forward for Michigan is for Gov. Whitmer to immediately begin the process of decommissioning Line 5 in the Straits of Mackinac.” - Liz Kirkwood, Executive Director FLOW For Love Of Water

“The time for action by the governor is now,” said Leonard Page, vice chair of the alliance. “Initiating the legal process for decommissioning Line 5 must start immediately so we can finally eliminate this serious risk of an oil spill in the Great Lakes.”

“The idea of building new fossil fuel infrastructure with a 99-year lease is nonsensical given the latest science bulletin about climate change,” said Bill Latka of TC350. “The IPCC, an international body of climate scientists, says that we have 11 years to reduce our fossil fuel use by 50 percent. Building a tunnel may not even be started in 11 years. It makes no sense.”