Enbridge’s request for federal approval of a Line 5 replacement oil pipeline in a proposed tunnel in the Straits of Mackinac should be rejected to protect the Great Lakes from the continued risk of a catastrophic oil spill and a pipeline that is no longer needed, 10 leading environmental and tribal groups said today in comments to the U.S. Army Corps of Engineers.

“The biggest consequence right now of this proposed project is that it distracts the government from its duty to shut down a risky oil pipeline in the Great Lakes. Instead, we are talking about a proposed oil tunnel that may or may not ever be built,” said Liz Kirkwood, Executive Director of FLOW. “However, if Enbridge insists on this, then a full environmental review of this tunnel proposal is required. That’s what a federal court told the Army Corps, and that’s what we are telling the Army Corps. There’s no shortcut when it comes to potential risks to the Great Lakes.” 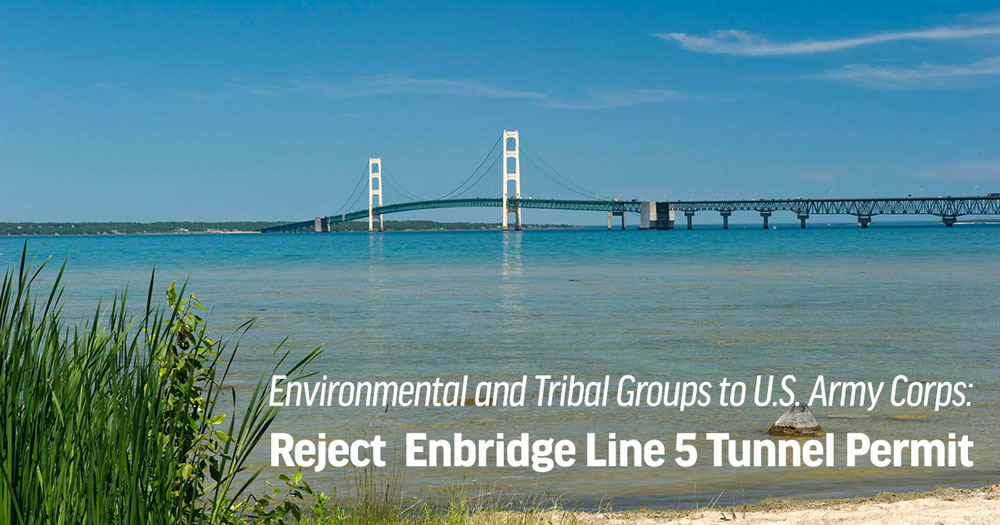 In their 22-page comment to the Army Corps, FLOW, Sierra Club, Clean Water Action, Northern Michigan Environmental Action Council, Straits of Mackinac Alliance, Groundwork Center for Resilient Communities, TC350.org, Straits Area of Concerned Citizens for Peace Justice and the Environment, Chippewa Ottawa Resource Authority (“CORA”), and Michigan League of Conservation Voters (“MLCV”) today requested a public hearing on the proposed permit and a thorough review of the tunnel project under the National Environmental Policy Act. So far the Army Corps has failed to set a public hearing or undertake an environmental assessment of the proposal. A federal judge in July ordered the shutdown of the Dakota Access pipeline in Missouri after ruling in March that the Army Corps failed to conduct a full environmental review of the proposed pipeline project. Enbridge also has an ownership stake in the Dakota Access pipeline.

In separate comments filed with the Army Corps, five Michigan tribes with treaty rights to the Straits said the massive proposed tunnel project is a threat to the spawning and fishing grounds for 60 percent of the commercial tribal whitefish catch.

"Whether it is a 67-year-old pipeline aging under pristine freshwater, or a proposed tunnel creating pollution and causing disruption to tribal fishing industries for years, Enbridge should not be allowed to cut corners and bypass a full environmental review, something that Line 5 has never had," said Bryan Newland, president of the Bay Mills Indian Community. "We've seen the exemptions made and lack of thorough pipeline equipment reviews result in surprises of corrosion, dents, and the most recent screw anchor damage. With the company's lack of transparency and poor track record, moving forward with a tunnel is putting pipelines and profits above the safety of Michiganders and the environment, allowing a potential oil spill to continue threatening our Great Lakes."

"Whether it is a 67-year-old pipeline aging under pristine freshwater, or a proposed tunnel creating pollution and causing disruption to tribal fishing industries for years, Enbridge should not be allowed to cut corners and bypass a full environmental review, something that Line 5 has never had." - Bryan Newland, president of the Bay Mills Indian Community

In their comments, the environmental groups cited numerous concerns with Enbridge’s tunnel proposal and said oil and propane supplies that are needed can be delivered by other means. Major concerns with the proposal include impacts on drinking water quality from millions of gallons of wastewater discharge and a potential oil spill, significant impacts on the local tourism economy, rental housing, public safety and health systems from a multi-year construction project. Additional risks include pipeline safety and financial exposure to the state from a tunnel abandonment by Enbridge or collapse, including the potential for an explosion involving hazardous liquids. Tunnel safety was cited in a 2019 letter by the American Transmission Company withdrawing any potential participation in the proposed tunnel project.

“This project tunnel project is a massive undertaking with huge water quality, coastal wetlands, drinking water contamination, and other impacts for the Great Lakes and Michigan,” said Anne Woiwode, Chair of the Sierra Club Michigan Chapter. “This involves a waterbody of international importance that is protected under the Clean Water Act and we expect the Army Corps to follow the law.”