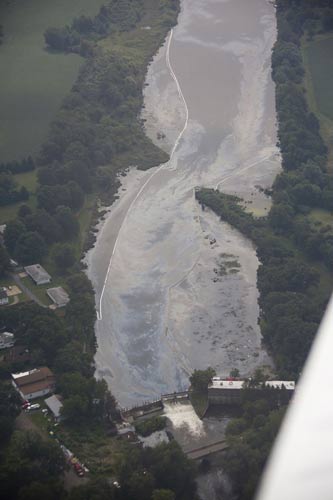 “The announcement today won’t make the Great Lakes safe from Enbridge oil spills,” said Lynna Kaucheck, Senior Organizer for Food & Water Watch.  “Only one thing will do that: stopping the flow of oil through the Straits of Mackinac.

“Gov. Snyder and Attorney General Schuette must act now—before winter comes--and stop the flow of oil through the Straits.”

Today’s announced financial settlement with Enbridge amounts to less than 10% of Enbridge’s profits for just a single year and compares to more than $10 billion in profits the company has made since the 2010 oil spill, the largest on land in U.S. history.

“For Enbridge—a Canadian company which pays no federal taxes in the United States—this settlement is chump change and just the cost of doing business,” said Deb Hansen of Concerned Citizens of Cheboygan and Emmet County.   “For Michiganders, the cost of an oil spill in the Great Lakes means potentially billions of dollars in damages and threatens a source of clean, safe drinking water for 30 million people. That’s too heavy a price to pay for us to pay.”

A recent University of Michigan study said a pipeline rupture in the Straits could impact 700 miles of Lake Michigan and Lake Huron coastlines.  It was also recently revealed that Enbridge has been using defective parts from Asia in its pipelines but reportedly cannot identify which pipelines may be at risk.  Another pipeline company using the defective parts experienced a pipeline blowout in 2013.

Enbridge continues to operate the Straits pipelines, pushing up to 23 million gallons of oil a day through the Great Lakes under an easement agreement with the state dating to the construction of the pipelines 63 years ago.

A Michigan Pipeline Safety Board appointed by Gov. Snyder is analyzing the twin Enbridge pipelines through the Straits, a process that will likely take at least a year to complete and with an uncertain outcome.  Enbridge is paying for the $3.6 million state study and will review it before it is released to the public.