A controversial oil industry group masquerading as consumer advocates has launched a Michigan media campaign in support of Enbridge’s proposed oil tunnel even as state officials are moving to prioritize protecting the Great Lakes from dangerous oil pipelines in the Straits of Mackinac. 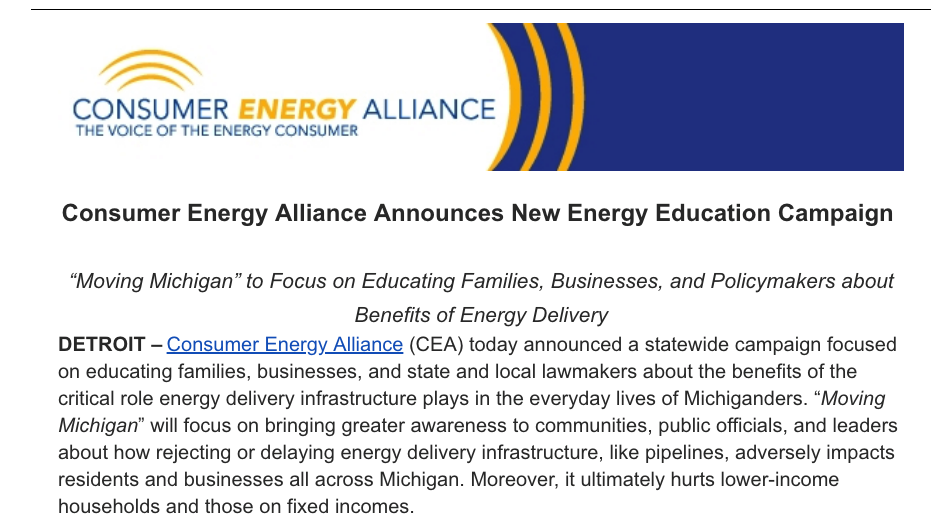 In a widely distributed press release announcing the Michigan campaign and proclaiming itself “The Voice of the Energy Consumer,” the Texas-based Consumer Energy Alliance is a front group for the fossil fuel industry, according to The Center for Media and Democracy and the Energy and Policy Institute, two watchdog groups.

Consumer Energy Alliance, with ties to BP, Marathon, ExxonMobil, and Shell, “is part of a sophisticated public affairs strategy designed to manipulate the U.S. political system by deluging the media with messaging favorable to the tar-sands industry…,” according to Source Watch, a Center for Media and Democracy publication.

“Enbridge is now using other oil industry money to buy Michigan and expand its dangerous oil highway through our state and our waters for decades,” said David Holtz, spokesperson for Oil & Water Don’t Mix. “Michiganders care about their Great Lakes and won’t be fooled by Enbridge’s astroturf friends and their phony front group, as Enbridge desperately tries to overcome the truth about its dirty oil pipelines and avoid accountability for its dangerous Line 5.”

Michiganders care about their Great Lakes and won’t be fooled by Enbridge’s astroturf friends and their phony front group, as Enbridge desperately tries to overcome the truth about its dirty oil pipelines and avoid accountability for its dangerous Line 5.

Source Watch lists 65 oil, gas, nuclear, and other energy industry lobbying and corporate firms as supporters and affiliates of Consumer Energy Alliance. Citing an Enbridge-funded report commissioned by the administration of former Gov. Snyder, the front group claimed in its campaign announcement that shutting down Line 5 means Michigan consumers would pay millions of dollars in higher gasoline and energy costs. But even Enbridge’s own data shows that the vast majority of Line 5 oil is transported to a Sarnia, Ontario, refinery and a recent Wall Street analysis debunked claims surrounding fears of the loss of propane for home heating in the Upper Peninsula if Line 5 is shut down.

“The only thing Michigan has to fear is a future that includes Enbridge’s Line 5 and its threat to the Great Lakes and nearly 400 Michigan waterways along its 645-mile long path,” said Holtz.