Vote Enbridge off the Island survey questions why Governor and Detroit Chamber are letting Enbridge play them for suckers.

Between now and the Detroit Regional Chamber of Commerce’s Mackinac Policy Conference May 29-June 1, the Oil & Water Don’t Mix campaign is offering Michigan residents an opportunity to address the Great Lakes threat by voting Enbridge off the island. The public can weigh in through an online poll regarding the chamber decision to allow the Canadian oil giant, Enbridge Energy, to sponsor the high-profile event that annually attracts Michigan’s top political and business leaders and news media to the island.

The Vote Enbridge Off the Island online survey at www.OilandWaterDontMix.org/vote will be promoted at the pipeline advisory board meeting where Oil & Water Don’t Mix will hand out sugary candy suckers and put a spotlight on what has become business-as-usual: giving Enbridge what it wants. 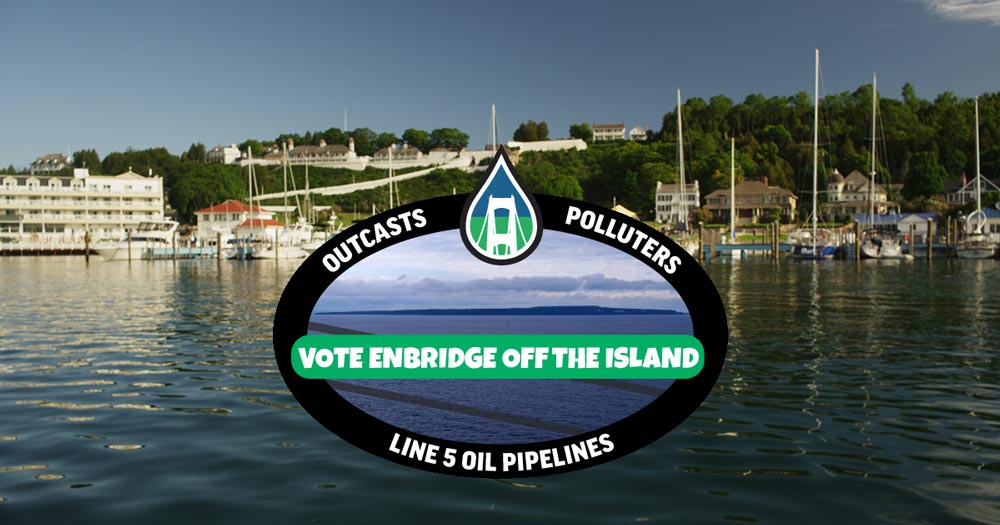 “Our Great Lakes must be a survivor, yet Enbridge is playing the governor and the chamber both for suckers,” said Sean McBrearty, Oil & Water Don’t Mix coalition coordinator. “Michigan shouldn’t be a sucker for Enbridge. There’s no sugar-coating the fact that Gov. Snyder is doing just that with his support for keeping Line 5 oil in the Straits of Mackinac, and so is the chamber by supporting Enbridge at this big island event. We need to vote Enbridge off Mackinac Island and kick Line 5 oil out of the Great Lakes.”

If Enbridge’s Line 5 oil pipes rupture in the Straits, Mackinac Island would likely lose access to drinking water and it would be a death blow not only for the island’s tourist economy but the impact would be widespread, said Leonard Page, a Cheboygan homeowner who has been helping lead efforts to shut down Line 5.

“You don’t have to live near the Straits to understand how an oil pipeline spill would devastate the region, so it’s puzzling why the Detroit chamber would promote Enbridge at this event,” said Page. “It’s even harder to understand why the governor has partnered with Enbridge on Line 5 instead of siding with the Great Lakes and northern Michigan residents.”

A Michigan State University researcher recently pegged the economic impact from a Line 5 oil spill at $6.3 billion, with most of the financial damage focused on Michigan tourism. That has Terry Peterson, owner of the Lighthouse View Motel in Mackinaw City, concerned.

"Michigan shouldn’t be a sucker for Enbridge. There’s no sugar-coating the fact that Gov. Snyder is doing just that with his support for keeping Line 5 oil in the Straits of Mackinac, and so is the chamber by supporting Enbridge at this big island event. We need to vote Enbridge off Mackinac Island and kick Line 5 oil out of the Great Lakes. - Sean McBrearty, Coordinator, Oil & Water Don't Mix campaign

“A major oil spill in the Straits could mean game over for small businesses like mine that depend on visitors,” said Peterson. “There are other options for Enbridge to get its oil to market, but it’s not like I can pick up and move my motel if tourists decide they don’t want to vacation where the scenic view is a giant oil slick.”

Last week it was disclosed that the Canadian oil giant has taken sides in Michigan’s 2018 elections by bankrolling a political action committee with $125,000 in corporate contributions. This comes as Gov. Snyder has signaled his support for replacing Line 5 in the Straits of Mackinac with a tunnel, with the state’s final decision expected by August that will be based on an Enbridge report due June 15. Although Snyder created the Pipeline Safety Advisory Board in 2014, he has ignored his own pipeline advisors and has never once requested a recommendation from the pipeline board. Meanwhile, Line 5 was damaged recently by an anchor strike. Previously, it was revealed that major areas of the pipeline in the Straits were without anchor support mechanisms and that the pipeline’s metal was exposed because of its damaged and missing coating.

Today's pipeline board meeting in Lansing is at the Causeway Bay Hotel, 6820 South Cedar Street.