More than 22,000 call on AG Schuette to shut down Enbridge Line 5

“The Alternatives Analysis downplays the massive risk and catastrophic impact of a Line 5 oil spill in the Straits of Mackinac, and Attorney General Schuette must act now to protect our Great Lakes,” said David Holtz, chair, Sierra Club Michigan Chapter and campaign coordinator for Oil & Water Don’t Mix. “The overwhelming response delivered by more than 22,000 people who care about protecting the Great Lakes sends a clear message: Line 5 must be shut down immediately.” 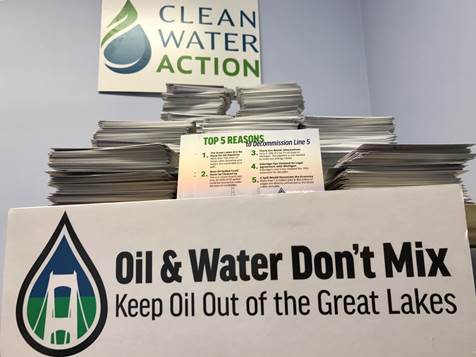 Last month, the State of Michigan held public feedback sessions across the state, where hundreds of Michigan residents attended to call for a Line 5 shutdown. Five of Gov. Snyder’s appointees to the Pipeline Safety Advisory Board signed a letter in July voicing concerns that the Alternatives Analysis was solely designed to support Enbridge’s interests.

“Responsibility for Line 5 falls on our elected leaders, and they must take full responsibility for the health of our Great Lakes by shutting down Line 5,” said Sean McBrearty of Clean Water Action. “Our Great Lakes are too precious to risk a catastrophic oil spill any longer, and the thousands of comments submitted by Michiganders should serve as a wake-up call to Bill Schuette.”

Our Great Lakes are too precious to risk a catastrophic oil spill any longer, and the thousands of comments submitted by Michiganders should serve as a wake-up call to Bill Schuette.” - Sean McBrearty of Clean Water Action

“The Alternatives Analysis was a missed opportunity to reveal to the public the dangers and risks of Line 5,” said Liz Kirkwood, director of FLOW. “The state should not waste any more time on this flawed alternatives study. Instead, it should conduct a thorough, independent analysis of the condition of Line 5 and immediately shut down the flow of oil through the pipelines in the meantime.”