MPSC’s Line 5 Tunnel Hearing Today Should Focus on Risks to Michigan, Not Benefits to Enbridge

Citizens groups plan to tell the Michigan Public Service Commission today that Enbridge’s proposed oil pipeline tunnel to replace Line 5 not only carries huge risks for Michigan, but also should not serve as an excuse to delay Gov. Gretchen Whitmer from acting immediately to end the dangerous threat of the existing pipelines in the Straits of Mackinac.

RSVP to listen to the public hearing Monday, Aug 24, or Submit an official public comment here.

The MPSC’s planned three-hour, online public hearing from 4 pm-7 pm today on Enbridge’s proposed tunnel marks the beginning of what is expected to be a roughly year-long process to determine whether the controversial pipeline is needed in Michigan and is safe. A number of concerned citizens and environmental and tribal groups are expected to testify in the virtual hearing. 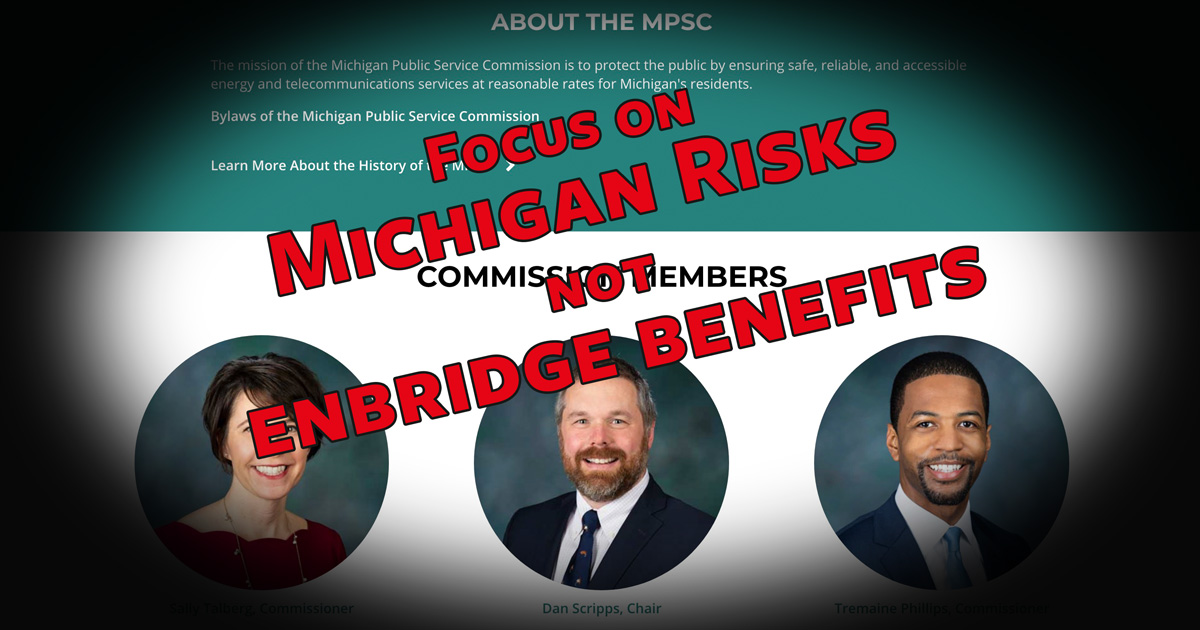 “The construction of the ill-conceived Line 5 tunnel – peddled as a safe alternative by Enbridge and their lobbyists – carries huge financial and ecological risks,” said Sean McBrearty, Oil & Water Don’t Mix coordinator. “Enbridge has a terrible track record in terms of safety and transparency and cannot be trusted to operate this dangerous pipeline. It's past time to end the threat and decommission Line 5 before Michigan has another avoidable, major man-made disaster on top of Enbridge’s 2010 oil spill catastrophe into the Kalamazoo River, the lead poisoning of Flint’s water and residents, the devastating Midland dam collapse.”

Discoveries in May and June of damage to Line 5 in the Straits raise significant questions about whether Enbridge can be trusted to monitor its own pipeline or react in a timely fashion to damage or a rupture. An oil pipeline rupture from Line 5 could have catastrophic consequences for our Great Lakes, putting Michigan’s drinking water, tourism, and fishing industry at risk.