An oil industry expert’s report released today by Environmental Defence Canada explodes the myth that Canadians are handcuffed to the dangerous Line 5 oil pipeline for their energy supply–an Enbridge lie that keeps the Great Lakes at risk and is embraced by the Canadian government.

Environmental Defence’s conclusion– “The reasons for shutting down Line 5 are significant and strong”--are correct. The idea that we have to wait until Line 5 in the Straits of Mackinac ruptures before it is shut down should be thoroughly rejected out of hand. The report and Environmental Defence’s overview, Closing Enbridge’s Line 5 Pipeline, makes the case that the worst possible option for Canada’s energy supply and Ontario’s energy consumers is to delay action until Line 5 ruptures or hope that a Great Lakes oil tunnel survives scrutiny and gets built sometime in the distant future before a catastrophic Line 5 failure. 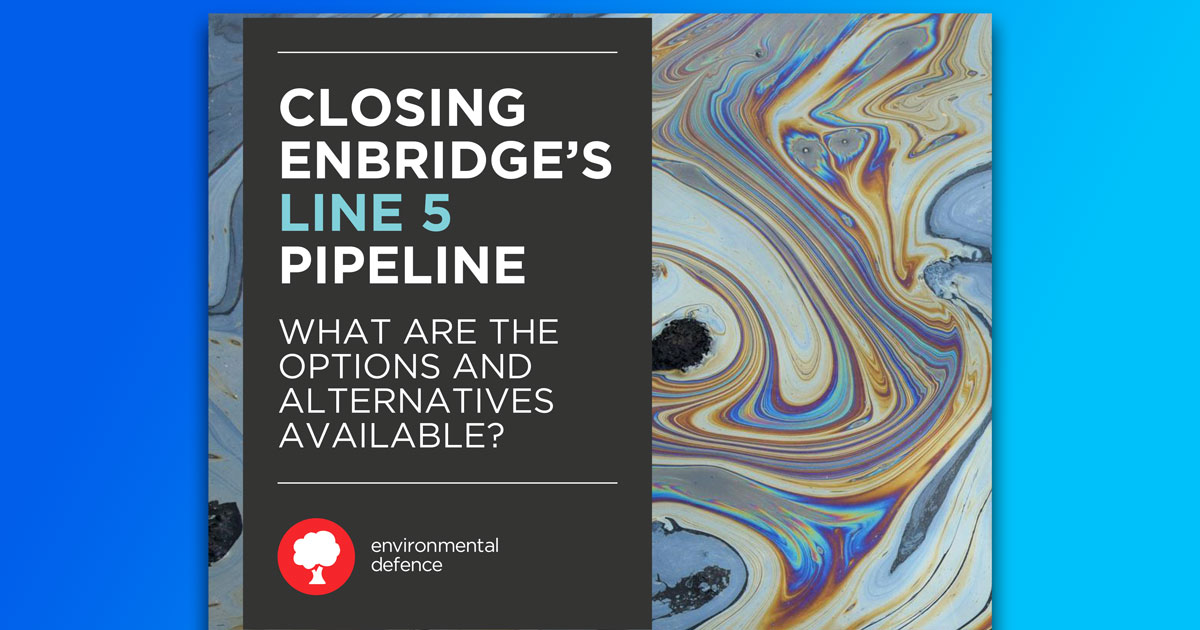 The report lays out in detail a path forward for Canada and does it strictly on oil industry terms, evaluating only fossil fuel transport options. While renewable energy options and the global transition from fossil fuels aren’t considered in the report itself, Environmental Defence makes the case for clean energy in their overview.

Environmental Defence’s conclusion– “The reasons for shutting down Line 5 are significant and strong”--are correct.

If Canada and the United States prioritize protecting the Great Lakes both national governments will quickly embrace the decommissioning of Line 5 and reject the false choice of a Line 5 tunnel as a solution. Regardless of how Canada responds to this Canadian report, the urgent mission of the Biden administration is to take immediate steps to support Michigan Gov. Whitmer’s lawful order to shut down Line 5 and the Michigan Attorney General’s litigation seeking an orderly decommissioning of this dangerous pipeline. More than ever, there are no excuses for delay and inaction. If the Biden administration ducks responsibility and allows Enbridge and Canada to misuse a 1977 binational treaty to keep Line 5 operating, it will be complicit in failing to protect the Great Lakes and drinking water supply from a catastrophe waiting to happen. We shouldn’t surrender our sovereignty to Canada and establish a dangerous precedent for the benefit of a Canadian oil conglomerate.

In Michigan, we know first-hand that we can’t trust Enbridge. It was Enbridge’s negligence that led in 2010 to the largest oil pipeline rupture in the state’s history. Enbridge’s public relations spin on the need for Line 5 should not survive the facts documented in this new Canadian report.