As Gov. Snyder Leads 5-Mile Walk, Campaign Will Live Stream from the Mackinac Bridge About Threat of Enbridge’s Oil Pipelines in the Straits. 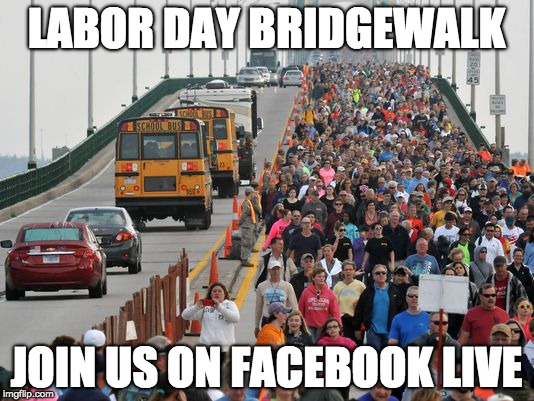 As Gov. Rick Snyder crosses the beautiful Straits of Mackinac during the 59th Annual Labor Day Bridge Walk, the Oil & Water Don’t Mix campaign will be right there with him on the Mackinac Bridge streaming the event via live video on Facebook.

Anyone interested in following the campaign’s Labor Day plans and joining the Facebook Live event as we talk about the threat from Enbridge’s Line 5 oil pipelines in the Straits, can do so at the Oil & Water Don’t Mix Facebook page at https://www.facebook.com/oilandwaterdontmixcoalition/

Where: The Mighty Mackinac Bridge in the Straits of Mackinac

When: Bridge Walk begins at 7am EDT Monday, Sept. 5 on the north end of the bridge. Live Facebook streaming starts shortly afterward.

Canadian pipeline company Enbridge pumps almost 23 million gallons of oil every day through its Line 5 pipelines in the Straits of Mackinac, from Superior, Wisconsin to Sarnia, Ontario. Turbulent currents and winter conditions make the Straits the worst possible location for an oil spill.  Enbridge is currently operating in violation of the 1953 easement agreement with the State of Michigan.  Required supports for Line 5 have washed out for the second time in two years.  Independent experts have identified at least seven other state and federal violations of this legal agreement with the state.  Since 1988, this 63-year-old pipeline has failed at least fifteen times, dumping about 260,000 gallons of oil on land and in marshes. Because of the threat of a catastrophic oil spill to the Great Lakes, organizations with the Oil & Water Don’t Mix campaign have asked Gov. Snyder and Attorney General Schuette to end the state’s agreement with Enbridge and begin the process of ending the flow of oil through the Straits.