Today’s decision by Gov. Whitmer to request that Attorney General Dana Nessel conduct an independent review of Public Act 395 is welcome news for anyone who cares about protecting the Great Lakes from Enbridge’s dangerous, high-risk oil pipelines in the Mackinac Straits. 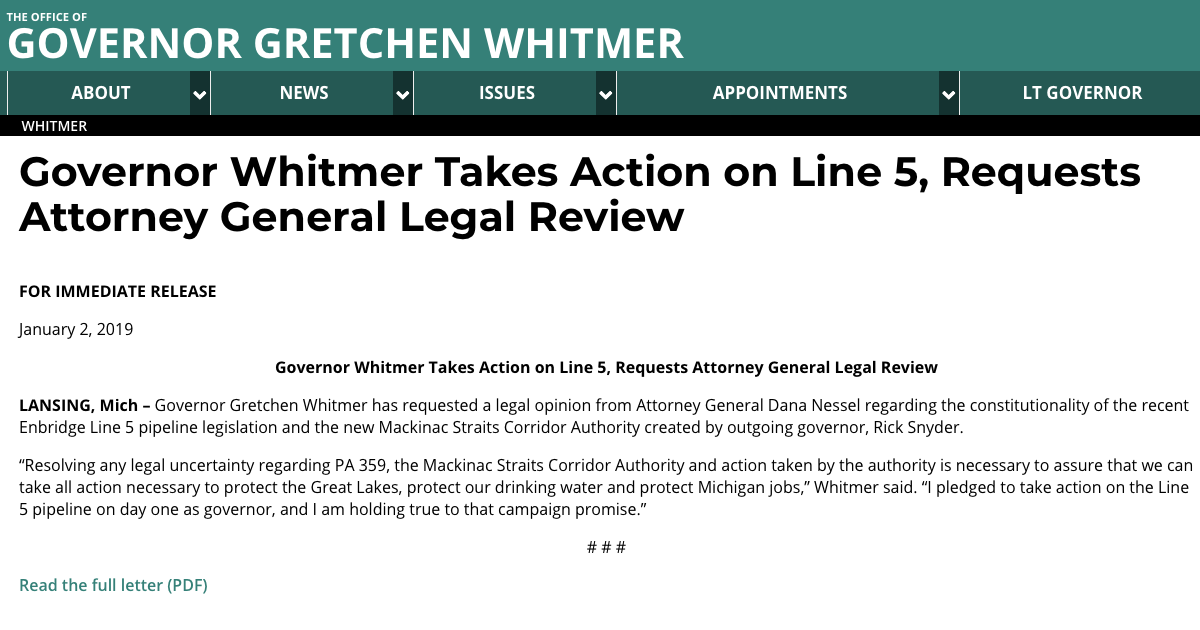 Independent legal experts who have examined this deeply flawed and misguided law passed by a lame duck legislature believe it cannot withstand the kind of independent scrutiny that the attorney general’s office is expected to bring to its review.

Today’s action by the governor and attorney general is an important step toward clearing the air on Line 5 and protecting the Great Lakes from an Enbridge Line 5 pipeline rupture. Public Act 395 created the fiction of solving the Line 5 problem but in reality, it laid the groundwork for backroom deals that would increase the risk for the Great Lakes and Michigan taxpayers.

For more than four years, former Gov. Snyder and former Attorney General Schuette have overseen a corrupt process intended to produce a good result for Enbridge. These maneuvers came at the expense of protecting the Great Lakes and Michigan’s economy from a high-risk oil pipeline rupture in the Mackinac Straits. Under Snyder and Schuette, Enbridge was allowed to fund “independent” Line 5 studies under the auspices of the state that were actually conducted by the oil industry. Those studies predictably led to the current proposal by Snyder and Schuette to keep Line 5 in the Mackinac Straits with the possibility of eventually putting Enbridge’s pipelines inside a tunnel.

With today’s decision by the new governor and backed by a new attorney general, Michigan can begin to reclaim its role as a protector of the Great Lakes and can address the threat posed by climate change.

Gov. Whitmer stated during her campaign that climate change "is a real threat to our environment, our economy, and the health and wellbeing of the people of our state.” With today’s decision by the new governor and backed by a new attorney general, Michigan can begin to reclaim its role as a protector of the Great Lakes and can address the threat posed by climate change.