With Enbridge atop the Naughty List, Would Santa Claus Really Support Wild Claims about the Impact of a Line 5 Shutdown?

What Union Gets Wrong in Today's Protest at Governor's Office.

Lansing, MI–Apparently Santa Claus cannot avoid being used to take sides in the State of Michigan’s legal effort to shut down the Line 5 oil pipeline to protect the Great Lakes, communities, and jobs.

Local union members from a Toledo, Ohio, refinery that receives oil by rail, truck, and two pipelines–including Line 5–say they plan to demonstrate today alongside Santa at Gov. Whitmer’s Lansing office in an effort to keep the damaged and dangerous old oil pipeline operating in the Straits of Mackinac.

In its press release announcing the protest, United Steelworkers Local 912 promoted Enbridge’s proposed Line 5 oil tunnel, but the project wouldn’t be built for 7-10 years and may not ever be approved by state and federal regulators. Line 5 would be at least 75 years old by then, and a quarter-century past its intended lifespan. 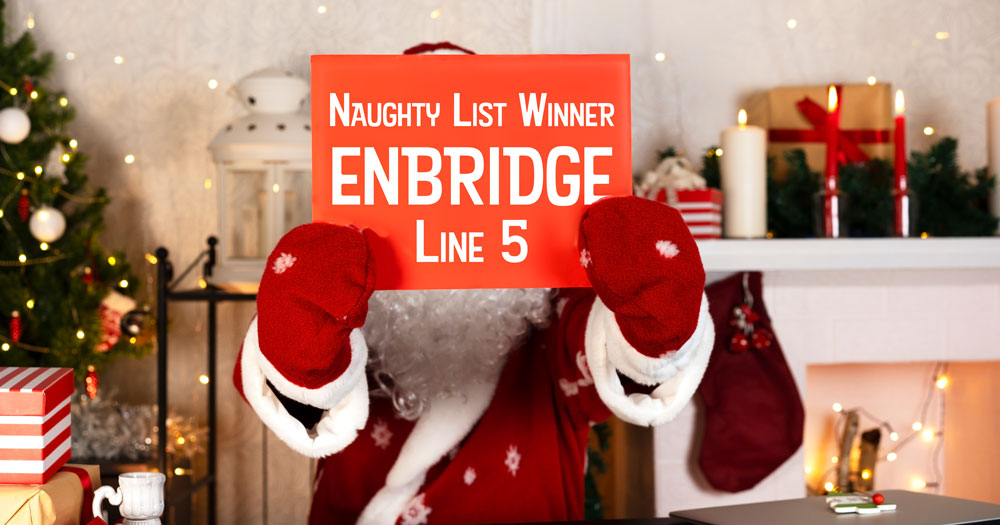 By comparison, Enbridge’s Line 6B was 41 years old when it failed, dumping more than 1.2 million gallons of heavy tar sands into the Kalamazoo River, which sickened more than 300 people, drove more than 150 people permanently from their homes and properties, and destroyed wildlife and habitat.

With Enbridge atop Santa’s naughty list every year, would the real Santa Claus, who delivers toys worldwide using renewable energy provided by reindeer, really back the spill-prone oil transport giant Enbridge or wild claims that a Line 5 shutdown would cause oil refining to stop in Toledo, jets to run out of fuel at Detroit Metro Airport, and Michigan’s Upper Peninsula to run dry of propane? Consider these facts from an analysis by FLOW:

Toledo–Two oil refineries operate in Toledo, Ohio and there's no credible evidence pointing to job losses from a Line 5 shutdown:

Gov. Whitmer, along with the Department of Natural Resources Director and the Michigan Attorney General, are upholding their duty to protect the Great Lakes, public health, and the drinking water supply from Line 5 and Enbridge. The Canadian energy company has a troubling track record of spills, including at least 33 failures on Line 5 that in total have spewed more than 1.1 million gallons of oil across Michigan and Wisconsin’s land and water.

A sizeable Line 5 spill into the Straits of Mackinac and the upper one-third of Lake Huron and Lake Michigan would threaten the 350,000 jobs in Michigan’s coastal communities that are directly tied to the Great Lakes and depend on the Great Lakes; a spill would jeopardize the 1.3 million jobs and $82 billion in wages tied to tourism, agriculture, fishing, shipping and related industries in the Great Lakes.

That’s why Oil & Water Don't Mix and the National Wildlife Federation in November delivered more than 40,000 petition signatures to President Biden asking him to support Gov. Whitmer's efforts to shut down Line 5.

Shutting down Line 5 will protect hundreds of thousands of jobs. A Line 5 shutdown would not significantly impact jobs at Toledo refineries. There is absolutely no evidence that a shutdown would impair operations at Detroit Metro Airport. The Upper Peninsula has viable options to Line 5 for Its propane supply and economy.