A Clear Plan to Decommission Line 5

Michigan Governor Rick Snyder and Attorney General Bill Schuette have the authority to immediately begin action to decommission, or shut down, the Line 5 oil pipeline based on public trust law governing the 1953 Easement agreement between Enbridge and the State of Michigan. 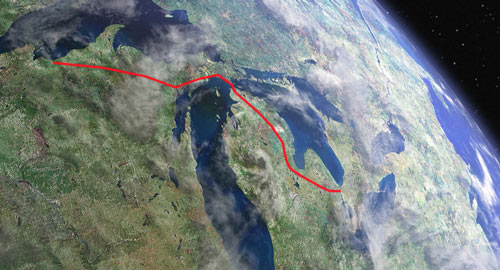 The State has announced it will decide what action to take by August 2018, and has made an agreement with Enbridge that calls for the oil company to research a replacement pipeline in the Straits. However, the State has not developed a plan for decommissioning Line 5, the only alternative that eliminates the risk of an oil spill in the Great Lakes.

In response to the State’s inaction, the Oil and Water Don’t Mix coalition has a plan to decommission Line 5. The following plan details practical, prudent, and feasible steps the State should take by August to begin the process to shut down Line 5, protect our Great Lakes and economy, and ensure Michigan’s energy needs are met:

1. The Attorney General or Governor immediately files a legal action against Enbridge to enforce ongoing violations of the Easement Agreement pursuant to public trust law. The administration’s failure to explain the legal mechanism by which it plans to make long-term decisions regarding the fate of Line 5 is problematic. Their inaction, which places the Great Lakes in considerable risk, needs to end. It’s time to move forward with legal action to compel strict enforcement of the current easement, set a timetable for ending the easement and move forward on plans to replace the pipeline with alternative methods of moving products to customers.

2. Governor Snyder directs the Michigan Public Service Commission (MPSC) to examine alternatives for providing propane to the Upper Peninsula. Line 5 carries propane from Superior, Wisconsin to a propane storage-and-distribution center in Rapid River, Michigan. The State should immediately create a plan to replace this propane supply without Line 5. The State can build upon research that has already been completed, such as in the 2017 alternative analysis report prepared by Dynamic Risk 1 and independent expert analyses. 2

The 2017 Dynamic Risk report identified that a 4-inch pipeline from Superior, Wisconsin to Rapid River, Michigan could serve as an alternative.3 The report also found that the propane delivered to Rapid River, Michigan could be replaced with additional trucks and/or railcars between Upper Peninsula supply terminals. The report estimated that replacing the propane transport with trucks or rail would create 21 jobs in the Upper Peninsula and $1 million/year in earnings,4 and found that any resulting cost increases would be within the same order of magnitude as normal year-to-year volatility and seasonal fluctuations.5

The State already should have propane backup sources to supply current customers if Line 5 service was interrupted - for example in the case of a rupture - but there is no such contingency plan in place that is publicly available. Line 5 has ruptured at least 29 times since 1968, spilling more than 1.1 million gallons of oil into Michigan’s air, water, and land. During these pipeline rupture interruptions, presumably Enbridge instituted propane and other backup plans.

Due to the relatively high cost of propane compared to other heating sources, the State immediately should evaluate programs to assist Upper Peninsula households transition to more cost-effective, efficient heating sources, as well as ways to increase home efficiency. The State’s analysis of the future of the U.P.’s propane delivery infrastructure should include plans to reduce reliance on propane.

Timing: This step should be taken immediately and a plan should be completed before the State’s action in August. The alternate plan to deliver propane should be in place before the pipeline is decommissioned.

3. Governor Snyder directs the MPSC to examine alternatives for transport of light crude oil produced in northern Michigan to refining operations. The small volume of oil produced in northern Lower Michigan – about 2 percent of Line 5's daily flow or about 12,000 barrels a day – could, according to the Dynamic Risk report, potentially be transported by a smaller pipeline within the Lower Peninsula,6 or by a combination of truck and rail. Advanced planning with sufficient lead time is critical to implementing these feasible alternatives.

The State and other stakeholders can weigh the costs and benefits of these options. These replacement solutions are for the short term to bridge the gap as Michigan transitions to efficiency and clean sources of energy, which are increasing their market share in both the transportation and heating sectors.7

Timing: This step should be taken immediately and should be completed before the State’s action in August.

4. MPSC moves forward with alternatives to meet Michigan’s needs. The Michigan Public Service Commission can move forward during the shutdown process to carry out these recommended alternatives for propane and oil movement that do not include pumping these products under the Great Lakes. Meanwhile, Enbridge and its competitors can utilize the additional capacity and flexibility available via the broader North American pipeline network to meet refinery demand for crude oil in Sarnia, Detroit, and Toledo.

5. Line 5 is disassembled and removed from the Straits and state has a plan for the removal of the rest of Line 5. The State needs a plan for what will happen to the four miles of Line 5 in the Straits, 641 miles of terrestrial segments of pipeline, and the 13 pump stations once the pipeline is decommissioned. This plan must include purging of hydrocarbons, removing the pipeline from the Straits, and removing additional segments. It also must include an estimate of the costs and construction jobs, and who will pay these expenses.

The Dynamic Risk report included an analysis that assumed “abandoning the pipeline in place,” proposing that the Straits Crossing segment be filled with water and portions of the terrestrial segments be filled with concrete. They estimate a construction cost of $212 million and the creation of 2,200 new jobs.8 Actual removal of the pipeline and remediating the land will cost more and create additional jobs.

The majority of Line 5 oil is not used to meet Michigan’s energy needs - at least 90 percent of the oil it transports leaves Michigan and never returns - so a decommission plan does not need to include how to replace Line 5’s full capacity.9 The plan addresses the remaining issues for Michigan, all of which are solvable: propane delivery in the Upper Peninsula, moving the small amount of oil produced in the Lower Peninsula to refineries, and removing the decommissioned pipeline.

5 The range 10 cents to 35 cents/gallon is the upper bound impact on propane consumers in the U.P., according to Dynamic Risk Alternatives Analysis Final Report (2017). Section 4.2.3.1.5.