HOW DOES THIS ALL FIT TOGETHER?

The cost of oil production is rising dramatically as the “easy oil” - that which is close to the Earth’s surface - has already been found and extracted. We have now moved into “extreme energy” territory, pursuing the oil that requires more energy, more water, and more cost and effort to extract and move to market.

One example is when the deepest oil well in history was drilled - a 35,000-foot vertical depth oil well in 4,135 feet of water. When the well ruptured, the result became the Deepwater Horizon Oil Spill, releasing 210 million gallons of oil into the Gulf of Mexico in 2010. Another example is the oil extracted from the Bakken oil fields of North Dakota. This type of crude may be more flammable than traditional heavy crude oil due to a large number of chemicals and fracking fluids, such as diesel and kerosene, used to release the oil from deep shale formations. Fracked Bakken oil was involved in the catastrophic train derailment explosion that incinerated 47 people in Lac-Mégantic, Quebec, in the summer of 2013.

THE TROUBLE WITH TAR SANDS 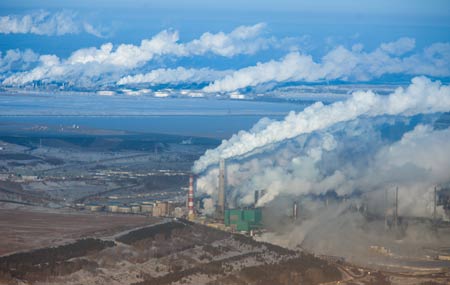 One of the most extreme forms of energy is tar sands oil, also known as oil sands. The largest concentration of tar sands in the world, with an estimated equivalent of 2.2 trillion barrels of oil, is located in Western Canada. Tar sands extraction and production are destroying ecosystems and wildlife habitat. Extracting corporations are creating extensive lakes of toxic sludge that are the largest man-made structures in the world. Oil derived from tar sands (also called synthetic crude) releases 20-percent more carbon into the atmosphere than traditional oil because of the increased amount of energy it takes to extract and refine the raw form into usable fuels.

“Get a bucket of tar that you use to patch your roof, go out to the sand box, [and] dump it in there. Then pour…hot water in, mix it, and try to get that tar to separate from the sand as much as you can.” - Dan Woynillowicz of the Pembina Institute describing the tar sands purification process

For every gallon of gasoline made from tar sands, 5.9 gallons of fresh water are used for extraction and processing - that’s 3 times more than traditional oil.

Retired NASA climatologist James Hansen said that if we allow Canada to exploit the oil in its vast tar sands, it’s “game over for the climate.” The oil contained in these tar sands contain twice the amount of carbon dioxide emitted by global oil use in our entire history.

WHY ALL THE TALK ABOUT TAR SANDS?

There was a recent nationwide debate about the construction of a new pipeline called Keystone XL. The pipeline, proposed by TransCanada, another Canadian corporation, would have moved synthetic crude and dilbit, both derived from tar sands, between the Canadian tar sands region, across the U.S.-Canadian border, to refineries in Houston, Texas to be refined to usable gasoline and oil products and made available for sale on world markets. Citizens were concerned about the impacts of using and transporting these tar sands products, and brought some strong opposition to the Keystone XL. Since the Keystone XL was to cross an international border, it needed a permit from the U.S. State Department. The permit was denied by the Obama administration because of the detrimental impacts to the climate that burning this dirty fuel would bring.

In the mean time, and with much less fanfare, Enbridge has been upgrading pumps and pipes along their network to carry tar sands products from Canada. Their pipelines already cross international borders. Experts say that the Enbridge network can surpass the proposed volume of tar sands to be transported by Keystone XL. Enbridge is already transporting diluted bitumen or “dilbit”, the heaviest kind of tar sands oil in their Line 78 (formerly called Line 6B until Enbridge changed the name in September 2016). This is the pipeline that ruptured and spilled 1,000,000 gallons of dilbit into Michigan’s Kalamazoo River watershed in 2010.

Does Tars Sands Oil Increase the Risk of Pipeline Spills?

Because of the more viscous makeup of dilbit, it must be pumped at higher pressure and at higher temperatures than conventional crude oil. Additional toxic chemicals are added to allow the product flow. Some sand remains in dilbit. A combination of these attributes has led some engineers to compare dilbit to “fast, hot, and toxic liquid sandpaper.” Add this to the fact that 41 percent of the pipelines were built to carry conventional crude oil in the 1950’s and 1960’s. The alarming speed at which tar sands are being added to this pipeline network raises legitimate questions about the likelihood of many more accidents. The environmental group Natural Resources Defense Council (NRDC) notes that pipelines in the upper Midwest that routinely carry oil from tar sands have spilled 3.6 times more oil per pipeline mile than the U.S. average.

Line 5 does currently not carry dilbit, but much of the oil and oil products are derived from tar sands - the dirtiest kind of oil.