With more than 200,000 Michigan jobs tied to tourism, the future of Line 5 is a major jobs issue.

TRAVERSE CITY – Michigan business owners in the tourism and craft brewing industries today called on Governor Rick Snyder and Attorney General Bill Schuette to begin the process of shutting down Line 5 immediately, citing the tens of thousands of jobs put at risk every day by the 64-year-old pipeline.

“A Line 5 rupture would be disaster for my company, my family, my 300 staff members and my community,” said Bob Sutherland, president and founder of Glen Arbor-based Cherry Republic, which also released a new video today highlighting the dangers of Line 5. “As owner of Cherry Republic, I feel a deep responsibility to protect the land, water, and air of Michigan for my family, employees and community. Enbridge has taken no responsibility for protecting the resources of this state and has lost the right to pipe one drop of oil through its obsolete, 64-year-old pipeline.”

According to Michigan State University Extension, the state of Michigan had 113.4 million visitors in 2014 and Michigan’s tourism industry sustains 214,000 jobs annually. According to a 2016 University of Michigan study, a Line 5 oil spill could impact up to 700 miles of Great Lakes shoreline.

The Great Lakes are essential to our economy in Michigan and across the region, which is why leaders should take action now and shut down Line 5 to prevent a catastrophic oil spill in the Straits.” - Rich Bergmann, Owner of Lake Charlevoix Brewing Co. 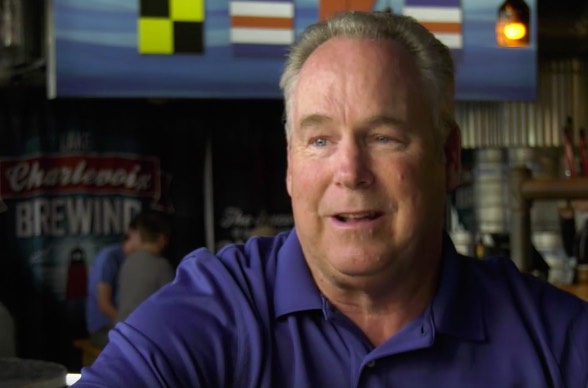 “An oil spill in the Great Lakes would have a tremendous impact on fresh drinking water, and many communities do not have an alternative water source,” said Rich Bergmann, owner of Lake Charlevoix Brewing Co. “Craft breweries like mine depend on this water as the number one ingredient in our beer. The Great Lakes are essential to our economy in Michigan and across the region, which is why leaders should take action now and shut down Line 5 to prevent a catastrophic oil spill in the Straits.”

More than 250 Michigan businesses support the Oil & Water Don’t Mix campaign, including Short’s Brewery and HopCat, which is spearheading its own campaign to encourage customers to support decommissioning Line 5.