State regulators this week turned back Enbridge’s application for a permit to build a Line 5 oil tunnel in the Straits of Mackinac, saying the Canadian oil transport giant failed to evaluate other alternatives under Michigan’s environmental laws.

The decision to send the oil tunnel permit request back to Enbridge because it was incomplete--although not a death knell for the controversial project--was applauded by legal experts and environmental organizations. The setback to Enbridge’s plans may also be an important signal that the administration of Gov. Gretchen Whitmer wants to take a closer look at the threat of oil pipelines in the Great Lakes and their damage to the climate. 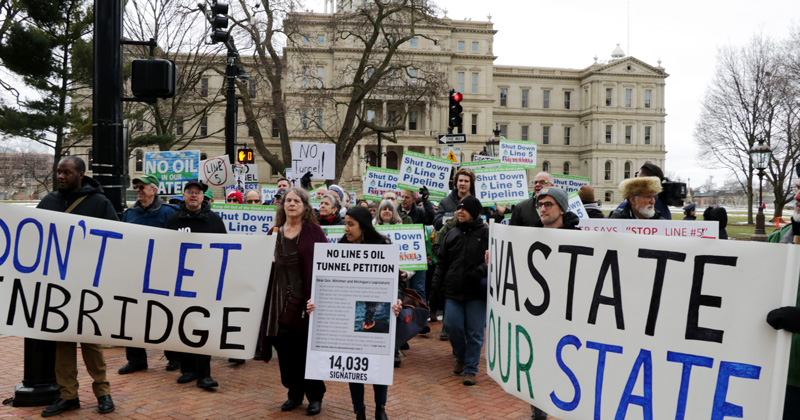 In its letter to Enbridge rejecting the permit application, the Michigan Department of Environment, Great Lakes, and Energy (EGLE) cited Enbridge’s failure to analyze alternatives to the proposed oil tunnel under Michigan’s Environmental Protection Act. Enbridge will have 30 days to resubmit the permit application or it will be considered withdrawn, according to the EGLE letter.

“The Whitmer administration’s decisions on Line 5 will likely define her environmental record as much as anything else she does as governor,” said Sean McBrearty, Oil & Water Don’t Mix coordinator. “This initial step means EGLE isn’t just rubber-stamping Enbridge’s permit application but will apply appropriate environmental standards in making the decision. The burden is now on Enbridge to prove why Michigan and the Great Lakes should shoulder the huge risk of having Line 5 oil pipelines in the Great Lakes and crossing 400 other waterways. We don’t think that’s a hurdle Enbridge can overcome. Line 5 and oil are not the future -- water is, and an oil tunnel in the Great Lakes is a bad bet for Michigan.”

“The Michigan Environmental Protection Act requires the state to consider the climate impacts of a new oil pipeline project. It would be disastrous for our state to allow an oil pipeline that is proposed to last 99 years at a time when scientists urge us to cut all climate emissions in half this decade and much of the world is turning away from fossil fuels,” said Madigan. “We know Michigan doesn’t need Line 5. We shouldn’t be taking a huge environmental and financial risk when there are more reliable, cleaner, safer energy sources out there and when the oil industry is an increasingly bad financial bet.”

EGLE’s three-page letter to Enbridge outlined other failures of the company’s submission, including the fact that in its 350-page permit application Enbridge does not acknowledge that the future of its Line 5 oil pipeline is the subject of legal challenges, including a lawsuit seeking by Michigan Attorney General Dana Nessel seeking an orderly decommissioning of Line 5.

"It would be disastrous for our state to allow an oil pipeline that is proposed to last 99 years at a time when scientists urge us to cut all climate emissions in half this decade and much of the world is turning away from fossil fuels." - Kate Madigan, Director of the Michigan Climate Action Network

“We agree with EGLE that Enbridge’s application falls woefully short of complying with legal requirements,” said Liz Kirkwood, executive director of FLOW, a Great Lakes law and policy center based in Traverse City. “Now the state of Michigan should require Enbridge to apply for and obtain authorization for an easement to occupy state-owned bottomlands with a tunnel before any construction permitting proceeds. Enbridge is putting the cart before the horse, which suits their interests, but not the public interest in protecting the Great Lakes. The company’s haphazard rush during the pandemic is alarming.”

Michigan's tribal community responded to EGLE's action on Enbridge's permit by spotlighting the stakes involved in the final outcome.

"Protecting Michigan's environment from the threat of Line 5 is more than just protecting the rights of tribal fishing and tribal way of life. We must shut down Line 5 to protect the health and safety of Michigan's families, wildlife and an international economy based on the Great Lakes," said Bryan Newland, president of Bay Mills Indian Community. "Our decisions must be made to protect our natural resources, putting our environment and people above profits and pipelines.