Sign the No Oil Tunnel petition calling on Gov. Whitmer to decommission Line 5.

Enbridge claims that if its aging Line 5 pipeline through Michigan is shut down - for any reason – many residents of the Upper Peninsula will suffer 1, 2 from a loss of propane to heat their homes.

The following research refutes that assertion by pointing to propane supply alternatives that exist or could be readily developed to serve as a backup plan and eventual replacement for Line 5’s supply.

This paper is limited to the issue of propane for the Upper Peninsula when Line 5 is shut down due to a rupture, governmental edict, or any other event.

1. The State of Michigan must prioritize the paramount interests of its citizens by ensuring an uninterrupted and reliable propane supply to the residents of the Upper Peninsula.  Several viable alternatives for this transition exist, including the following:

a. An active rail line from a propane distribution hub in Superior, Wisconsin, comes within a few miles of the Plains All American Rapid River propane processing plant, which currently is supplied by Enbridge Line 5.  Connecting the rail line to the plant would provide a reliable propane delivery system for the Upper Peninsula when Line 5 is shut down.

b. Another alternative is to install a 4-inch propane pipeline from Superior, Wisconsin, to Rapid River, Michigan.  This also would provide a reliable source of propane when Line 5 is shut down.

c. A third alternative is to use 3-4 tank trucks per day to transport propane to Rapid River from Superior, Wisconsin.

3. Currently, there is no publicly available plan in the event Line 5 ruptures.  Immediately developing and implementing a backup plan for supplying propane to the Upper Peninsula is essential.

4. The most prudent course of action is for the State of Michigan to immediately institute an emergency plan and make it publicly available while permanent viable alternatives are evaluated as part of a comprehensive Line 5 decommissioning plan.  Such precautionary planning both prioritizes the citizens and the Great Lakes.

Who Currently Supplies Propane for the Upper Peninsula?

Natural Gas Liquids (NGLs) are primarily a by-product of crude oil production. Among other compounds, NGLs contain propane. Typically, the amount of propane 3 in the NGLs is 28%.

In the case of Line 5, the NGLs originate primarily in Alberta, Canada, with some also coming from the Bakken formation in North Dakota.

Enbridge transports NGLs to other locations via Line 5. A small amount of the propane in the NGLs is removed at Rapid River, Michigan, in the central Upper Peninsula by Plains All American. They utilize NGLs from Enbridge Line 5 to separate and purify propane.

The remaining propane in Line 5, along with the rest of the NGLs is sent primarily to Sarnia for purification and sale as propane, and as a chemical feedstock.

If Line 5 were shut down, due to another leak or governmental edict or some other event, propane must remain continuously available to those in the Upper Peninsula.

Role of Plains All American at Rapid River, Michigan

While Enbridge and Plains All American are separate commercial entities, they sometimes work closely together. For example, the facility for separating and purifying propane at Rapid River, Michigan, in the central Upper Peninsula is owned and operated by Plains All American. However, the raw NGLs 9, containing roughly 28% propane, and are the feedstock for Rapid River, arrive by Line 5, which is owned and operated by Enbridge. After Plains All American has removed a small portion of propane at Rapid River 10, the remaining NGLs, including most of the propane, are re-injected into Line 5, with nearly all being sent to Sarnia. 11

Role of Plains All American at Kincheloe, Michigan

How much of the propane for the Upper Peninsula comes from Line 5?

Less than 2% of the propane transported in Line 5 stays in the Upper Peninsula. (See Figure 1) 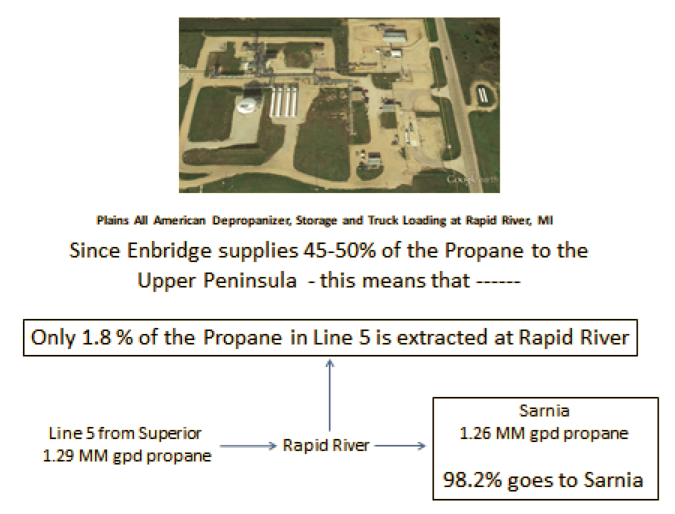 The small amount of propane going to the Upper Peninsula from Line 5 was indirectly confirmed in the recent Dynamic Risk report. Quoting the report 14 (emphases added):

“On the Michigan Upper Peninsula, Line 5 delivers NGL to the Plains Midstream depropanization facility at Rapid River, Michigan. Propane is extracted from the NGL stream and the depropanized NGL stream returned to Line 5 for transport to Sarnia. This extraction is only a small fraction of the total volume of product transported…….”

Dynamic Risk further indirectly confirmed the amount of propane extracted from Line 5 at Rapid River with the following statement 15: “Of the NGLs transported in Line 5, less than 5% are delivered into Rapid River.”

In fact, a more accurate estimate of the amount of propane extracted at Rapid River from Line 5 is considerably less than the 5% reported by Dynamic Risk. It is no more than 2%.

If Line 5 is shut down, where will the Upper Peninsula’s propane come from?

There are several viable paths by which propane can be supplied to the Upper Peninsula in the event Line 5 is shut down for any reason.

1) Roughly 50% of the propane supply to the Upper Peninsula is NOT dependent on Line 5.  Should Line 5 be shut down, given adequate planning, alternative suppliers driven by free-market economics would quickly fill the void left by Line 5.

2) Plains All American has a facility at Superior, Wisconsin, dedicated to separating and purifying propane from NGLs.  The rated capacity of this facility is 10,000 bpd of NGL 16  or 2,800 bpd of propane.  While an incremental expansion of the capacity at Superior may, or may not, be needed, this would enable the shutdown of the facility at Rapid River, making it a distribution center only, and eliminate a frequently cited, but erroneous, justification for not shutting down Line 5.

3) A new pipeline could be built to transfer propane from Superior to Rapid River.  This line would be relatively small (per Dynamic Risk 17, 4 inches in diameter).  It could follow the existing route of Line 5, thus alleviating right of way concerns.

4) Besides a pipeline, other means of transporting propane from Superior, Wisconsin, to the Upper Peninsula are readily available:

a. Transport of propane by tank truck.  In a joint study by Beth Wallace, a staff member of the National Wildlife Federation, and Gary Street, it was determined that 3-4 tank trucks per day could transport the entire amount of propane now being supplied by Rapid River. 18

5) As mentioned earlier, propane is currently shipped by rail from Alberta to a storage and distribution facility owned by Plains All American at Kincheloe, Michigan.  Shutting down Line 5 would have no impact on this facility as it does not utilize Line 5.

1. “…………..there are a lot of people that rely on what Line 5 supplies,” said Enbridge regional communications supervisor Ryan Duffy”. http://greatlakesecho.org/2017/02/27/great-lakes-businesses-join-forces-against-oil-pipeline/ “

2. ……………..Enbridge has routinely pointed to Line 5’s delivery of propane to Michigan’s Upper Peninsula as a critical public benefit that helps justify the risk of a spill at the straits”. http://greatlakesecho.org/2017/02/27/great-lakes-businesses-join-forces-against-oil-pipeline/

5. As late as January 2016, Enbridge claimed that 85% of the homes in the Upper Peninsula were supplied with propane coming from Line 5. Six months later, in June of 2016, they reduced this amount to 65%. They have not reduced it further since then.

18. Per Wikipedia, large tank trucks may have a volume of up to 11,600 U.S. gallons. https://en.wikipedia.org/wiki/Tank_truck

20. An active rail line is within a few miles of the Plains All American Rapid River processing plant. Connecting the rail line to the plant would provide a reliable delivery system. Extension of the rail line would be far less expensive than building a tunnel under the Straits of Mackinac.