Church leaders representing all of Michigan’s 202 Episcopal parishes have now endorsed resolutions calling for Enbridge’s Line 5 oil pipelines in the Straits of Mackinac to be shut down unless Gov. Rick Snyder guarantees their safety. 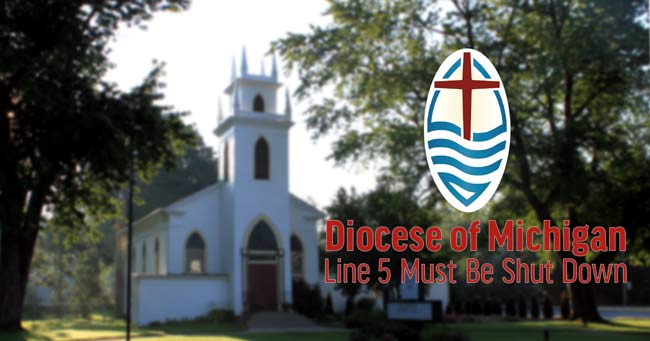 The Detroit-based Diocese of Michigan is the state’s largest with 78 congregations and has joined three other state Episcopal dioceses in calling for action by the governor on Line 5. The Diocese of Michigan includes areas of southeastern Michigan and reaches to Ingham and Genesee counties.

“Episcopal leaders in Michigan are united around protecting our Great Lakes waters from a catastrophic oil spill in the Mackinac Straits,” said Gary Street, a Cheboygan County resident, and church member. “People of faith share a common belief that we must protect God’s creation and understand what that means for sustaining human life.”

In the Diocese of Michigan's Line 5 resolution, Bishop Wendell N. Gibb Jr. said, “…the history of pipeline leaks shows that there is a significant risk of severe damage and economic loss to government entities, individuals, businesses and the environment.”

"The history of pipeline leaks shows that there is a significant risk of severe damage and economic loss to government entities, individuals, businesses and the environment.” - Bishop Wendell N. Gibb Jr.

Episcopal Dioceses in Eastern, Western and Northern Michigan have endorsed similar resolutions, all citing the state’s authority over the Straits pipelines under a 1953 easement agreement with Enbridge. Additionally, 67 local cities, townships, counties and tribal organizations have endorsed shutting down Line 5 oil through the Straits.