Federal regulators asked Enbridge to reduce the pressure in their Line 5 pipeline after more extensive damage after anchor strike was revealed. The Great Lakes remain vulnerable as long as Enbridge is pumping oil through the Straits of Mackinac. 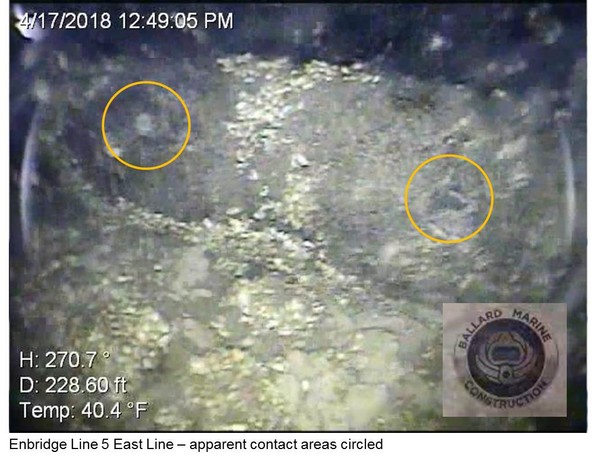 Bolder and more responsible actions by Gov. Snyder and federal officials must be taken to protect the Great Lakes from a catastrophic oil spill. Temporary emergency measures reported in recent days, including reducing pressure on Enbridge’s Line 5, are no guarantee that this damaged pipeline won’t rupture. Putting sleeves or other Band-Aids around the damage is no substitute for removing the threat of a spill to the Great Lakes. That’s why federal pipeline officials—instead of merely suggesting Enbridge take limited measures to protect the Great Lakes—must order the emergency closure of the damaged pipeline in the Straits of Mackinac and should do so immediately. State officials should then proceed to end the much-violated, ancient 1953 agreement with Enbridge to operate this vulnerable pipeline in the Straits of Mackinac and begin decommissioning Line 5. Measures that fall short of these actions will keep the Great Lakes and Michigan at severe risk of a pipeline rupture that would be an environmental and economic catastrophe.

This month’s anchor strike on Enbridge Line 5 vividly demonstrates that a major pipeline rupture under the Straits of Mackinac is not hypothetical. Gov. Snyder and Attorney General Schuette share responsibility for allowing deteriorating, damaged vulnerable Line 5 oil pipes to continue posing a threat to the Great Lakes. For more than 1,000 days after declaring the pipeline’s “days are numbered,” Michigan’s attorney general has taken little action to protect the Great Lakes. If Attorney General Schuette had acted to end the state’s easement agreement for Line 5 three years ago, there likely would be no need for the emergency half-measures being taken today.

"This month’s anchor strike on Enbridge Line 5 vividly demonstrates that a major pipeline rupture under the Straits of Mackinac is not hypothetical."

Michigan’s governor, meanwhile, ignored his own pipeline advisors and cut a deal reached in secret with Enbridge to keep Line 5 right where it is today following a series of botched studies. The Snyder administration is also allowing Enbridge to install 22 pipeline supports, another half-measure creating an additional potential hazard if a ship or barge anchor were to drop and hook one of the new, suspended supports.

Enough is enough. Michigan can’t afford half-measures, studies, backroom deals and no action when both the threat and the solution for the Great Lakes are so obvious: As long as Line 5 is pumping oil through the Straits of Mackinac its vulnerability is a danger to the Great Lakes. It must be shut down now and decommissioned forever.