A major energy provider has rejected a proposed Straits of Mackinac utility tunnel as an “unacceptable” way of transporting electricity to Michigan’s Upper Peninsula, dealing a blow to the tunnel’s future and calling into question the state’s involvement in the proposed tunnel project, which mainly benefits the Enbridge oil pipeline conglomerate. 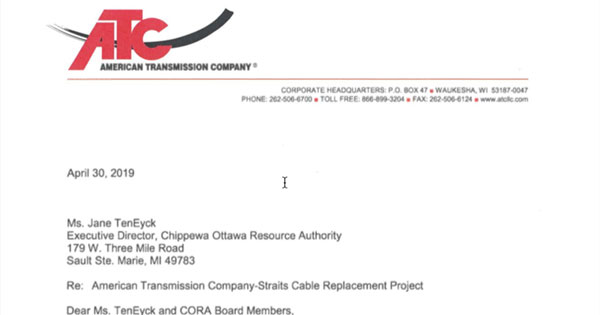 ATC’s disclosure came in an April 30 letter to Jane TenEyck, Executive Director or the Chippewa Ottawa Resource Authority, a consortium of five Michigan tribes who have treaty rights in the Straits of Mackinac.

"ATC's letter shows that the idea of a 'utility tunnel' beneath the Straits was not based on science or a desire to protect the Great Lakes,” said Bryan Newland, Chair of the Bay Mills Indian Community, a CORA member. “It was a political idea pushed by lame-duck politicians to benefit a single foreign corporation. That idea put the people of Michigan at risk."

Among the reasons ATC cited for rejecting the proposed Straits tunnel are uncertainty surrounding the tunnel and safety concerns.

“ATC does not believe that installing high voltage electric lines in close proximity to high-pressure oil or gas lines is a good idea,” Tom Finco, an ATC vice president, said in his letter to CORA. Moreover, said Finco, a utility tunnel carrying oil, gas and electric lines would dramatically increase costs. It is likely those costs would be passed on to UP electric users who already pay Michigan’s highest utility costs.

ATC’s submarine electric cables in the Straits were severed by an April 1, 2018 anchor strike that also damaged Enbridge’s underwater Line 5 oil pipelines. ATC said it has re-established one of two electric cables that were severed by the ship’s anchor and plans to install solid cables that would not contain any liquids that could be released in the event of a cable rupture.

It's never been clearer that Enbridge is pretending there's a public purpose to their private oil tunnel in order to gain access to the public waters and bottomlands of the Great Lakes. - Liz Kirkwood, Executive Director of FLOW

Gov. Whitmer has ordered state agencies to halt permitting and other tunnel activities in response to an opinion by Attorney General Dana Nessel who that found legislation creating a new Mackinac Straits utility tunnel authority was unconstitutional. Whitmer, however, said last month that she will begin discussions with Enbridge that could lead to her own tunnel proposal, an action that has been widely criticized by environmental groups and others.

"It's never been clearer that Enbridge is pretending there's a public purpose to their private oil tunnel in order to gain access to the public waters and bottomlands of the Great Lakes," said Liz Kirkwood, an environmental attorney and executive director of FLOW, a Great Lakes law and policy center based in Traverse City.

"The Great Lakes Submerged Lands Act requires there be a 'public purpose,' no impairment or interference with fishing and other public trust uses and rights of citizens and communities, and a showing of no feasible and prudent alternative for transporting Canadian oil back to Canada. The state of Michigan must restore the rule of law and transparency by requiring Enbridge to apply for a tunnel under the law, not negotiate it behind closed doors."