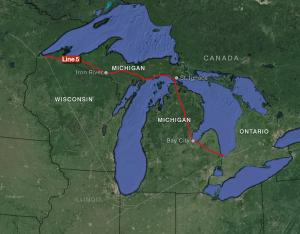 Enbridge is the company responsible for the largest inland oil spill in U.S. history. In 2010, an Enbridge operated pipeline in Calhoun County, Mich. burst, sending roughly 843,000 gallons of oil into Talmadge Creek.

As pipes age, cracks and corrosion can cause ruptures. Old or poorly managed welds can create weak spots, which opens the door to a possible oil spill.

The U.S. Coast Guard told the Detroit Free Press in September that [Enbridge] “is not adequately equipped or prepared” for a heavy oil spill in the Great Lakes. The good news is that first responders for a hypothetical Great Lakes oil spill are aware of these problems and are developing a plan for action.