Citizens groups today applauded part of an administrative law judge’s ruling on Monday that legal challenges to permits issued by the state for an Enbridge Line 5 oil pipeline project in the Straits of Mackinac can move forward because Enbridge failed to show that the installation of 73 anchors along the pipeline would not harm the Great Lakes. 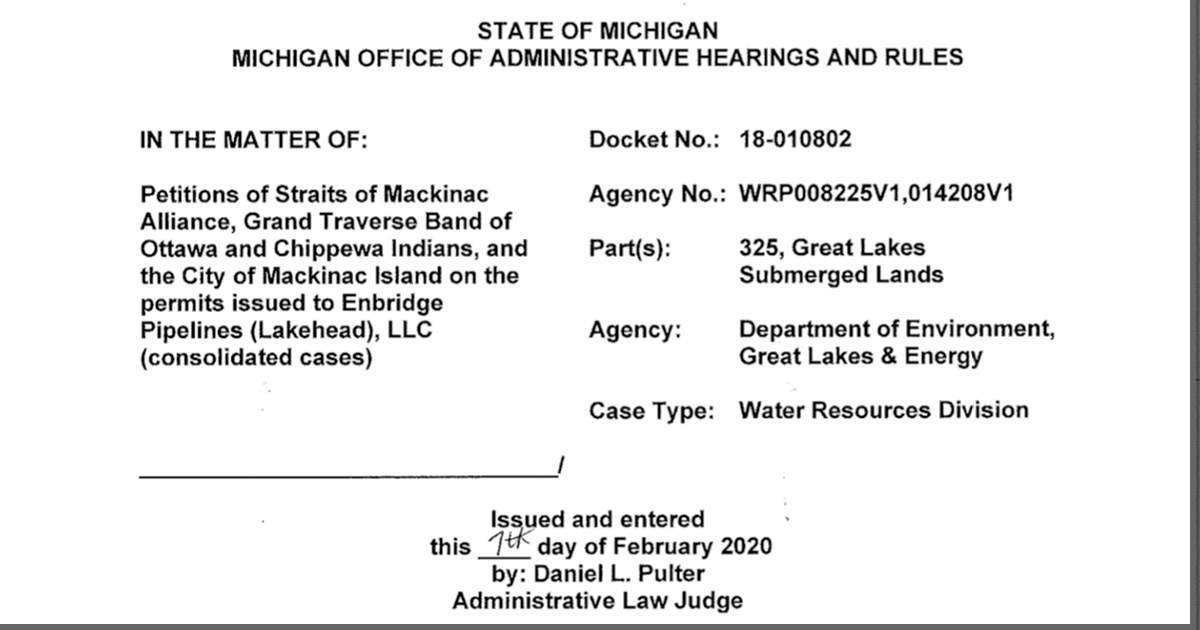 “This ruling means that Enbridge must follow Michigan’s rules and can’t simply give lip service to protecting the Great Lakes when it comes to Line 5 permits,” said Jim Olson, President of FLOW. “FLOW and others advised the state in 2016 that they must require a comprehensive environmental evaluation of these massive Enbridge anchor supports suspending 3 miles of pipeline above the lakebed.

"This decision means Enbridge and the state must now prove they have done that, and that the existing Line 5 does not pose more than a minimal potential for harm. We believe a thorough real evaluation of the overall risks of harm and alternatives to avoid that harm will lead to a conclusion that the risks are so far beyond minimal, the Line 5 must be shut down and decommissioned.”

Monday’s 18-page decision by Administrative Law Judge Daniel L. Pulter was in response to motions following the filing of a challenge to a series of permits issued by the former state Department of Environmental Quality in 2018 and 2019 for Line 5 support anchors. In their legal challenge to the permits, the Grand Traverse Band of Ottawa and Chippewa Indians, the City of Mackinac Island and the Straits of Mackinac Alliance said the state had failed to consider the environmental impacts of the anchor project. While Judge Pulter ruled for the state and Enbridge on broader challenges, he ordered a full hearing on the question of whether the project complied with Michigan’s environmental protection laws.

“This ruling means that Enbridge must follow Michigan’s rules and can’t simply give lip service to protecting the Great Lakes when it comes to Line 5 permits.” - Jim Olson, President of FLOW

“When Line 5 was constructed in 1953 the powerful currents of the Straits of Mackinac were not taken into account,” said David Holtz, spokesperson for Oil and Water Don’t Mix. “Today there’s evidence showing the currents are stronger than what was known in 1953, and the suspended spans of pipeline could be hooked by another anchor strike. This ruling is a message to the state that they must move in that direction and away from relying solely on Enbridge’s terrible track record of unreliable assurances.“

“It’s time for the state to bring Enbridge under the rule of law that protects our water and our people,” Olson said.