On November 20, the State of Michigan released for public comment a study analyzing the alternatives to Line 5, an aging 64-year-old set of twin pipelines under the Straits of Mackinac. The position of Oil and Water Don’t Mix -- a broad coalition of residents, organizations, and businesses -- remains unchanged: the State must terminate the easement allowing Enbridge to use the lakebed for Line 5. 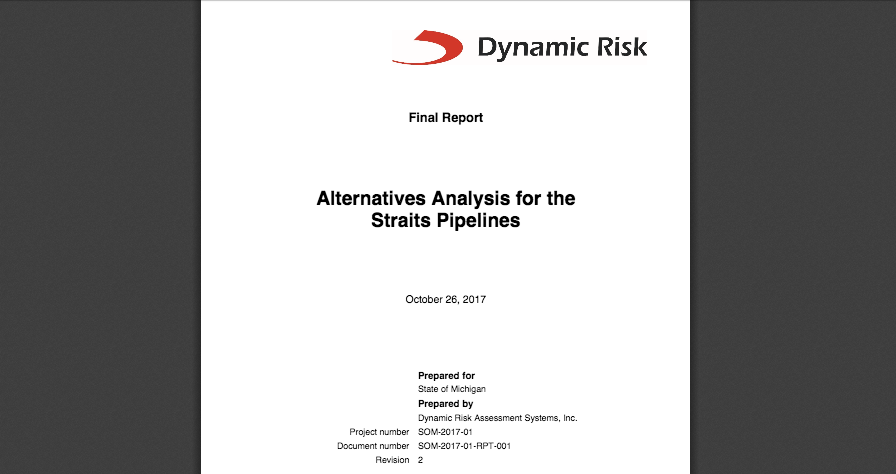 Even today’s flawed report found that there are reasonable alternatives to Line 5 in the Straits, including the option to decommission the pipeline -- the only alternative that eliminates the risk of an oil spill in the Great Lakes.

“The Straits are known to be the worst possible location for an oil spill. We know the risks -- if Line 5 fails it will be an utter disaster for our environment, economy, and way of life,” said Sean McBrearty, coordinator of Oil & Water Don’t Mix. “We have more than enough information to know this pipeline does not belong in the Great Lakes. It’s time to move beyond studies, now is the time for Governor Snyder and Attorney General Bill Schuette to take action.”

Just last week the Coast Guard announced that it is not prepared to clean up a pipeline spill in our Great Lakes. Governor Rick Snyder and Attorney General Bill Schuette have the authority and responsibility to terminate the easement to prevent a catastrophic oil spill.

“We placed that draft report side-by-side with the ‘final’ Alternatives Analysis report released today, and it contains most of the same failures as the June draft report.” - Jim Olson, president For the Love of Water (FLOW)

“We urge the Administration to move swiftly to shut down Line 5 and protect our Great Lakes, coastal economies, and continued way of life in Michigan,” said Anne Woiwode, Conservation Chair, Sierra Club Michigan Chapter. “It is not Michigan’s job to protect a Canadian oil company’s profits for oil that mostly goes back into Canada - our leaders’ job is to protect the Great Lakes, Michigan citizens, and businesses.”

Line 5 is owned by Enbridge, a Canadian oil pipeline company, which has put our Great Lakes at an unacceptable risk. For three years Enbridge has repeatedly failed to disclose problems with the pipeline’s protective coating. Just last month the company claimed that the gaps had been repaired, however according to the company's latest report, the number of coating gaps have multiplied.

The draft alternative analysis was released in June. During the 45-day period, OWDM and partners generated over 23,000 public comments calling for the state to decommission Line 5.

Oil & Water Don't Mix will be collecting additional comments to be submitted to the state.