ST. IGNACE, MI - Gov. Rick Snyder has rejected three recommendations from a state advisory board tied to operation of Enbridge's Line 5 oil pipeline, including one that proposed a temporary shutdown where it crosses the Straits of Mackinac.

In a Jan. 26 letter to members of the Pipeline Safety Advisory Board, Snyder thanks them for the resolutions put forward at the board's Dec. 11 meeting before explaining why he is not acting on any of them. 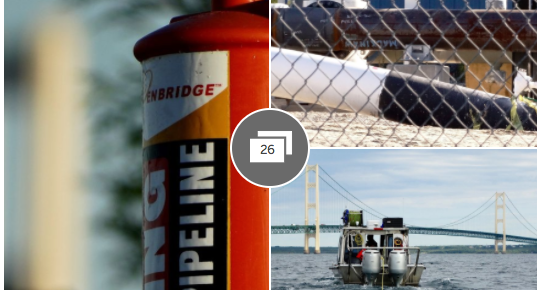 "Governor Snyder's response to the resolutions which passed his Pipeline Safety Advisory Board appears to be kicking the can down the road while the Great Lakes remain at risk," Shriberg said in a statement. "The state's failure to produce a timely and effective risk and alternatives analysis should not be an excuse for defensiveness and inaction."

The December advisory board meeting came in the wake of a new agreement between Enbridge Inc. and the state government, intended to improve safety and transparency issues tied to the 64-year-old twin underwater pipelines crossing the Straits of Mackinac.

Read the rest of the story at MLive