State Board Calls for Shutdown of Line 5 Pending Repairs

In a sharp rebuke to Gov. Rick Snyder's backroom agreement with Enbridge on Line 5, the Michigan Pipeline Safety Advisory Board (MPSAB) passed three resolutions at their Dec. 11 meeting. The resolutions reflect deep and growing concern about the potential for a disastrous spill of crude oil in the Straits of Mackinac.

MPSAB members cited their dismay at Snyder's failure to consult with the Board on the deal. MPSAB members also noted Enbridge's repeated failures to disclose critical information about the condition of the pipeline rationale for the votes. 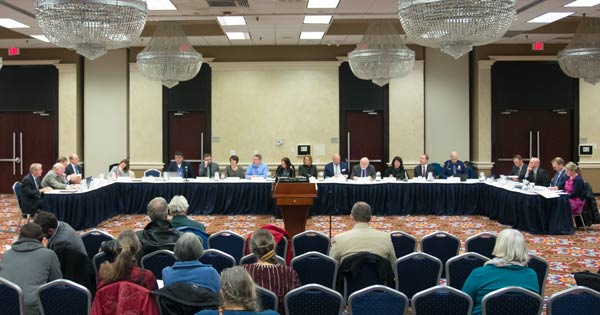 Sierra Club's Anne Woiwode calls the MPSAB actions a major turning point in the multiyear process of considering how Michigan should address Line 5. "We applaud the MPSAB's rejection of Enbridge's increasingly hollow assurances about the damaged oil pipelines that threaten our Great Lakes, as well as the drinking water, livelihood and economy of our state. There is more to do, but these brave board members have shown the path forward to permanently shut down Line 5."

Sean McBrearty, coordinator for Oil and Water Don't Mix, said "The Pipeline Safety Advisory Board, led by members representing Michigan businesses, communities, and tribes, took a promising step forward today by acknowledging the 64-year-old Line 5 pipelines are unsafe to operate, and we look forward to continuing to work with all MPSAB members, Attorney General Bill Schuette and Governor Rick Snyder to shut down these dangerous, outdated pipelines as soon as possible."

The resolutions were offered by MPSAB members Jennifer McKay, Mike Shriberg and R. Craig Hupp, and all three were supported by Homer Mandoka and Chris Shepler. Jeff Pillon also supported the third resolution after a minor amendment was added. Government representatives and the Enbridge and Marathon representatives on the board abstained from each vote. MPSAB members were all appointed by Snyder when the board was established in 2015.

"We applaud the MPSAB's rejection of Enbridge's increasingly hollow assurances about the damaged oil pipelines that threaten our Great Lakes, as well as the drinking water, livelihood and economy of our state." - Anne Woiwode, Michigan Sierra Club

The most sweeping resolution calls for an amendment to the Snyder Enbridge deal which would require the temporary shut down of Line 5 until there has been the full inspection of and repair of all the bare steel and coating breaches in the dual pipelines on the bottom of the Straits. During the meeting Enbridge acknowledged that they don't know why more than forty gaps in the coating to the pipelines have occurred, that repairs of all of those cannot be completed until next spring at the earliest and that because of mussels, debris, and vegetation, most of the length of the pipelines have not been thoroughly inspected. The resolution also calls for Enbridge to "Ensure that propane is delivered to the Michigan markets served by Line 5 at a reasonable cost to customers," mainly residents of the Upper Peninsula.

The second resolution called for an amendment to the Snyder Enbridge deal to modify the definition of "adverse weather conditions" that dictate shutting down Line 5 so that it is consistent with the limitation of emergency response to any potential spill. The last resolution calls for the state to conduct a much more robust assessment of alternatives to Line 5 by June 25, 2018. The Snyder Enbridge deal calls for completion of the review process for Line 5 by August 2018.