On Monday, August 20, 2018, Michigan residents who attended a hearing in Traverse City got a rare glimpse into what accountability looks like when it comes to protecting the Great Lakes from a catastrophic oil spill from Enbridge’s Line 5. 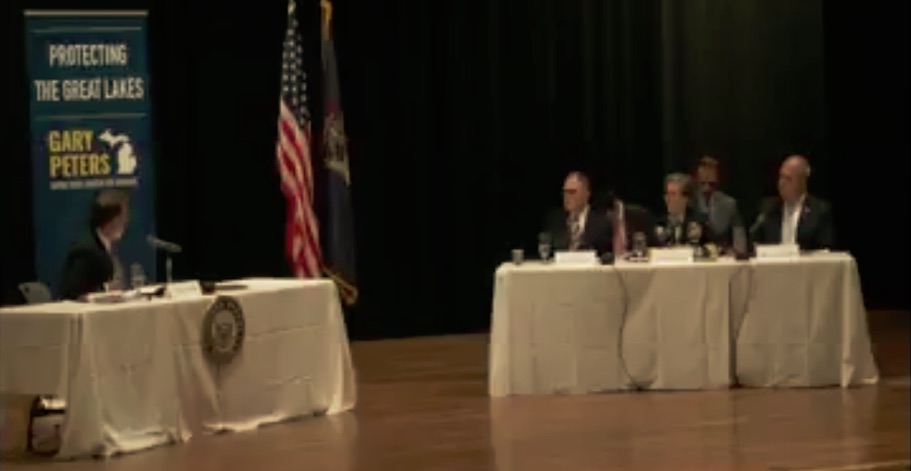 What we learned was not reassuring and strongly bolsters the case for shutting down Line 5. The top administrator of the federal Pipeline Hazardous Materials Safety Administration, Howard “Skip” Elliot, said Enbridge kept his agency in the dark for several days after an anchor struck the Straits pipelines. Elliot also disclosed that the anchor strike on Line 5 was far more serious than the “dent” initially reported by Enbridge: it was a gouge of the kind that created concern because it was of the type that can lead to cracks and potentially a pipeline rupture.

Elliot also suggested that during an April blizzard with high seas in the Straits in the weeks following the anchor strike, Enbridge was reluctant to reduce pressure in Line 5. As Sen. Peters pointed out to Enbridge Vice President David Bryson Monday, “when you had a damaged pipe in the Straits in severe weather” you still pushed back on taking safety steps. There is little trust in Enbridge and testimony from federal officials did nothing to change a similar lack of confidence in their oversight of the pipeline.

Elliot said his agency has never in its history ordered a problematic pipeline to be shut down even though they have the authority to do so. He also confirmed his agency is largely dependent on Enbridge for data and other oversight needs.

Enough is enough. As Larry Bell, owner of Bell’s Brewery, testified on Monday a Line 5 rupture would be top news around the world and would be devastating to Michigan businesses like his. That’s why Mr. Bell and 83 brewers from around the state recently called for the shutdown of Line 5—an action that only makes more sense when you know there are alternatives to Line 5 for transporting propane and oil.

When he opened today’s hearing, Sen. Peters described the Mackinac Straits as the “absolutely worst place” for an oil spill and what we heard from the witnesses that followed reinforced the need for the governor and attorney general to follow Sen. Peters’ lead and go further by using the authority they have as trustees of the Great Lakes to begin decommissioning Line 5.