This Morning’s Mackinac Bridge Authority Bill Action in the Legislature

The state Senate Government Operations Committee this morning reported out controversial Senate Bill 1197 along a party line 3-2 vote but not without raising the possibility that the controversial measure to amend the Mackinac Bridge Authority Act might be changed to address three key areas of concern from opponents of the measure.

The bill could open the door for Enbridge to attempt to bypass environment and other governmental reviews normally required in constructing an oil tunnel in the Mackinac Straits and expose the bridge authority to potential litigation costs under an agreement negotiated with Enbridge by Gov. Snyder.

Dennis Cawthorne from Friends of the Mackinac Bridge and a former Republican lawmaker proposed three amendments during testimony to the committee. Beforehand he said his first priority would be to scrap the idea of having the bridge authority own a proposed oil tunnel in the Straits, but seemed to concede that wasn’t the likely outcome from the committee. Committee Chair Arlan Meekhof encouraged Cawthorne to take up his proposals with bill sponsor Sen. Tom Casperson, who also testified and suggested he may be open to changes. 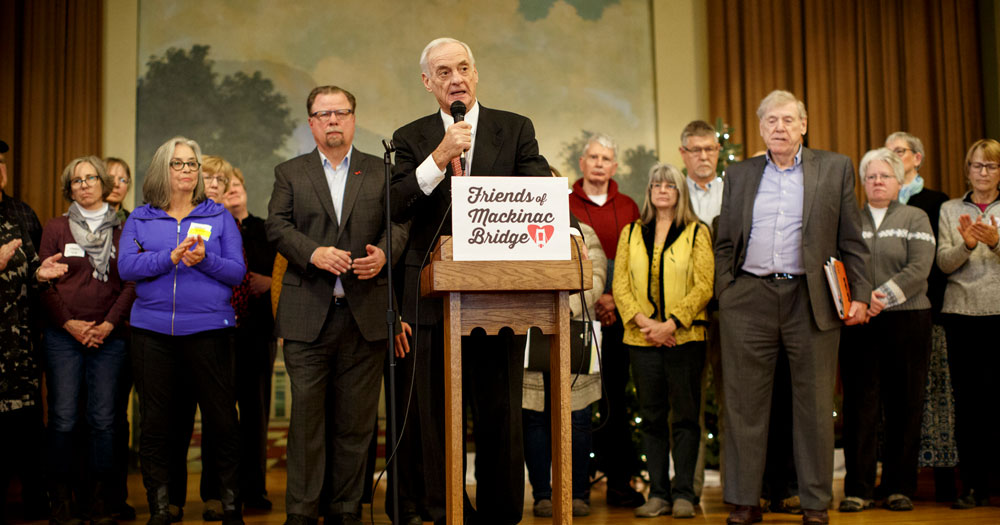 While the full Senate scheduled the bill for consideration today, it appears to have been bumped from the legislative calendar until tomorrow at the earliest. It is unclear whether negotiations surrounding the Cawthorne proposals delayed the vote. It is also unlikely that even if the Senate were to adopt Cawthorne’s proposed amendments that business, environmental and other citizen groups would support the bill. Strong opposition to an oil tunnel from Michigan tribes and citizen groups would remain regardless of measures taken to protect the Mackinac Bridge Authority from a controversial partnership with Enbridge.

In testimony before the committee today, several groups and individuals spoke against the proposed bill.

Terry Wilkerson, Michigan League of Women Voters, said the bill would undermine the independence of the Mackinac Bridge Authority and put Michigan taxpayers at risk. She also cited concerns about provisions allowing Enbridge to condemn private property under the authority’s power of eminent domain.

Joanne Galloway, an Upper Peninsula farmer, told senators there’s widespread opposition to the bill in her area. “I’ve seen an uprising of some very important people in my region that I don’t usually see,” she said.

Sean McBrearty of Clean Water Action, representing the Oil & Water Don’t Mix campaign, said the bridge authority would be used by Enbridge as a “shell corporation” to avoid the kind of environmental reviews a tunnel project would normally need to obtain permits. “If Enbridge wants to build a tunnel they shouldn’t go around the Great Lakes Submerged Lands Act and other laws,” said McBrearty.

Leonard Page, a retired attorney and vice chair of the Straits of Mackinac Alliance, outlined in detail the risk the bridge authority and state would undertake by owning a tunnel that transports Enbridge’s oil. Page pointed to weak provisions in Snyder’s tunnel agreement with Enbridge that could leave the authority responsible for liability from any tunnel or pipeline damages. “Neither the State of Michigan, the taxpayers or the bridge authority should have any liability,” said Page.