Are Michigan’s Residents, Communities, and Businesses Insured if Line 5 Fails in the Straits?

Investigation Reveals Critical Omissions and Finds Pipeline Might be Uninsurable

If the 66-year-old Enbridge Line 5 pipelines fail in the Straits of Mackinac, residents, coastal communities, businesses, and the State of Michigan could be left with lasting environmental and economic damage and little or no hope for insurance coverage from pipeline-owner Enbridge for the oil spill, according to environmental and tribal organizations in a teleconference held today.

Michigan citizens may believe they are protected, at least at some level, by the insurance Enbridge should be required to have in place to pay the costs of cleaning up an oil spill disaster in the Straits, where Lake Michigan meets Lake Huron. Unfortunately, that may not be the case. 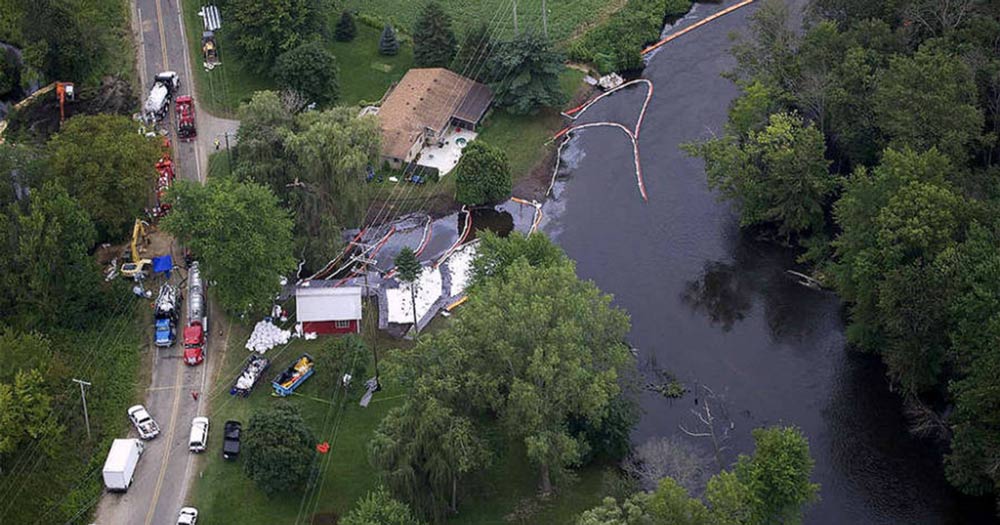 A new FLOW investigation has revealed potential holes in Michigan’s financial protections against a Line 5 pipeline rupture into the Great Lakes. The potential shortcomings could prove ruinous to communities, residents, and businesses that suffer losses at the hands of a Line 5 oil spill in the Straits. The problems can be traced to last year when environmental regulators were largely sidelined by the Snyder administration, which negotiated four Line 5 agreements directly with Line 5-owner Enbridge from the executive offices of the governor. (See FLOW’s article about the investigation.)

“The findings of our study suggest that Enbridge’s Line 5 oil pipelines in the Straits may never have been adequately insured and – given their age, location, and impaired condition – might be uninsurable,” said Skip Pruss, chairman of FLOW’s board of directors and an energy policy expert. “In its haste to sign agreements with Enbridge, the state during the end of the Snyder administration failed to conduct a study that would evaluate the financial capacity of Enbridge to address a worst-case scenario for damages and claims that may result from an existing Line 5 failure.”

The new revelations come as Governor Gretchen Whitmer has issued an executive order and new directives aimed at strengthening the state’s regulatory and administrative oversight capabilities for the Great Lakes, although Republican legislators are seeking to overturn the governor’s order in favor of delegating oversight in part to the businesses being regulated by the state.

“The findings of our study suggest that Enbridge’s Line 5 oil pipelines in the Straits may never have been adequately insured and – given their age, location, and impaired condition – might be uninsurable.” - Skip Pruss, chairman of FLOW’s board of directors

Unlike leaders in Minnesota and Wisconsin dealing with Enbridge, there is no evidence that the State of Michigan conducted a risk management and insurance review of any kind, nor does it appear that the State sought any assistance from qualified experts to determine whether the financial assurances Enbridge has proffered would, in fact, protect the State of Michigan and its natural resources as well as coastal communities, citizens, property owners, and businesses.

“While no amount of money can restore an oil-damaged fishery, the freshwater of the Great Lakes, or our cultural heritage, it simply is a dereliction of duty for the Snyder administration to not ensure that Enbridge has insurance that specifically covers oil spill damage and those tribes, communities, families, and businesses that would be harmed for generations to come,” said Bryan Newland, Tribal Chairman of the Bay Mills Indian Community.

A preliminary review raises many questions regarding the adequacy of Enbridge’s financial assurances that are supposed to mitigate the economic harm if Line 5 fails. Findings include Enbridge’s:

"We are calling on the Whitmer Administration to investigate the apparent lack of insurance for an Enbridge Line 5 oil spill in the Straits" - David Holtz, Communications Coordinator, Oil & Water Don’t Mix.

Based upon the preliminary review of the financial assurances intended to mitigate the present economic risks posed by a Line 5 failure and the ensuing questions and issues that have been identified by FLOW and independent insurance experts, the State of Michigan should:

“We are calling on the Whitmer Administration to investigate the apparent lack of insurance for an Enbridge Line 5 oil spill in the Straits and address the damage done by Snyder and lame-duck lawmakers before they rushed out the exit doors at the close of 2018, said David Holtz, Communications Coordinator, Oil & Water Don’t Mix. “It’s past time to shut down Line 5 before it delivers a direct hit to the very heart of the Great Lakes and the Pure Michigan economy.”