Michigan Attorney General Dana Nessel issued her first formal legal opinion today, finding Public Act 359 of 2018 unconstitutional because its provisions go beyond the scope of what was disclosed in its title.

Governor Gretchen Whitmer had sought the Attorney General’s opinion on the constitutionality of Act 359 in a request submitted on January 1. 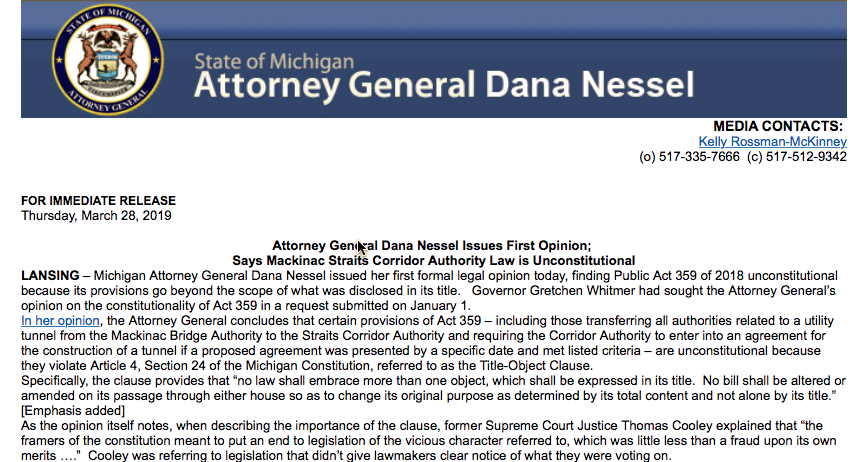 In her opinion, the Attorney General concludes that certain provisions of Act 359 – including those transferring all authorities related to a utility tunnel from the Mackinac Bridge Authority to the Straits Corridor Authority and requiring the Corridor Authority to enter into an agreement for the construction of a tunnel if a proposed agreement was presented by a specific date and met listed criteria – are unconstitutional because they violate Article 4, Section 24 of the Michigan Constitution, referred to as the Title-Object Clause.

Specifically, the clause provides that “no law shall embrace more than one object, which shall be expressed in its title. No bill shall be altered or amended on its passage through either house so as to change its original purpose as determined by its total content and not alone by its title.”

As the opinion itself notes, when describing the importance of the clause, former Supreme Court Justice Thomas Cooley explained that “the framers of the constitution meant to put an end to legislation of the vicious character referred to, which was little less than a fraud upon its own merits ….” Cooley was referring to legislation that didn’t give lawmakers clear notice of what they were voting on.

Finally, the Attorney General concludes in her opinion that: “any court determination that Act 359 is unconstitutional would likely apply that decision retroactively, and conclude that the Mackinac Straits Corridor Authority, its Board, and any action taken by the Board are void from their inception.”

The Attorney General’s opinion process included public comments from more than a dozen organizations and individuals, as well as a review of the opinion by the office’s Opinion Review Board, which is comprised of eight senior assistant attorneys general with appellate writing experience.