That agreement, a 1953 easement requiring Enbridge to exercise due care in operating its Line 5 pipeline in the Straits of Mackinac, has been violated repeatedly by Enbridge, forcing Gov. Whitmer to act to protect Michigan and the Great Lakes. 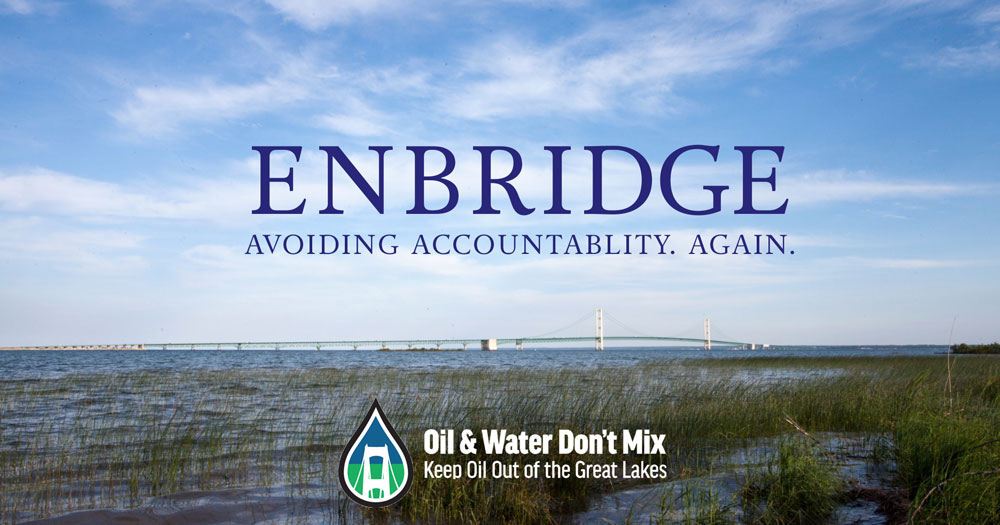 For 67 years Enbridge never questioned the state’s authority to enforce the easement agreement and only now when they’ve been held accountable do they challenge the state’s actions protecting the Great Lakes. Gov. Whitmer's decision to revoke the easement was made under the terms of that 1953 agreement and the public trust doctrine and is on a solid legal footing.

This is a transparent Hail Mary pass by Enbridge and will fail. Federal law delegates to states jurisdiction over where pipelines are located. Enbridge’s pipeline is located on the Straits of Mackinac lakebed. The state’s authority over Great Lakes bottomlands is unquestioned. We urge Gov. Whitmer and Attorney General Nessel to vigorously challenge this attempt by Enbridge to avoid accountability for their repeated failures to exercise care in operating Line 5. Enbridge's failures to operate Line 5 safely are now being compounded by their attempt to avoid responsibility and are another in a long line of proof points for why the governor was duty-bound to act as she did on behalf of our Great Lakes State.

“Governor Whitmer was elected to protect and defend the Great Lakes, which are vital to Michigan’s economy and support over 350,000 jobs. Today’s lawsuit filed by Enbridge brazenly defies the people of Michigan and their right to protect the Great Lakes from a catastrophic oil spill. In short, Enbridge claims it can continue to pump oil through the Straits of Mackinac indefinitely, posing enormous risk to our economy and way of life – and that the people of Michigan have no say in the matter. The company that spilled nearly one million gallons of oil into the Kalamazoo River and made Michigan the home of the largest on-land oil spill in American history has again demonstrated it cares only about its bottom line.”

BACKGROUND: Earlier this month, the state notified Enbridge that it is revoking and terminating the 1953 easement allowing Enbridge to operate the Line 5 dual pipelines in the Straits of Mackinac, effective 180 days from the date of the notice. The state is revoking the easement for violation of the public trust doctrine. This body of law recognizes the State of Michigan as the “trustee” of the public’s rights in the Great Lakes and lays upon the state legal obligations to protect those rights from any impairment. The state found that the 1953 easement violated the public trust doctrine from its inception because the easement does not make the necessary public trust findings.

Moreover, the state also found that the continued use of the dual pipelines cannot be reconciled with the public's rights in the Great Lakes and the State's duty to protect them. Transporting millions of gallons of petroleum products each day through two 67-year old pipelines that lie exposed along the entire span of a busy shipping channel presents an extraordinary and unacceptable risk. The dual pipelines are vulnerable to anchor strikes, similar dangerous impacts, and the inherent risks of pipeline operations.

As recent events have confirmed, this threat is very real. For example, in April 2018, the pipelines were struck and dented in three different locations by an anchor inadvertently dropped and dragged by a commercial vessel. Then, in June 2020, Enbridge disclosed that the pipelines had again been struck sometime in 2019 by anchors or cables deployed by nearby vessels, damaging pipeline coatings and severely damaging a pipeline support. Four of the five vessels potentially responsible for the impacts were operated by Enbridge’s own contractors.

In addition, the state is terminating the 1953 easement because Enbridge has repeatedly and incurably violated its terms. The easement requires Enbridge to exercise due care in operating the pipelines, and also requires Enbridge to satisfy numerous specific conditions, such as ensuring that the pipelines are physically supported at least every 75 feet, are covered by a multi-layer coating to prevent corrosion and other physical damage, and are within certain curvature limitations. Enbridge, however, has failed for decades to meet these obligations under the easement, and these failures persist and cannot be cured. For these and other reasons, the state is revoking and terminating the 1953 easement.