A federal government decision Sunday to halt work on the Dakota Access Pipeline puts more pressure on state officials here to end the threat to Michigan drinking water and the Great Lakes by beginning the process of ending the flow of oil through Enbridge Line 5 in the Straits of Mackinac, advocates for shutting down Michigan’s controversial pipeline said today. 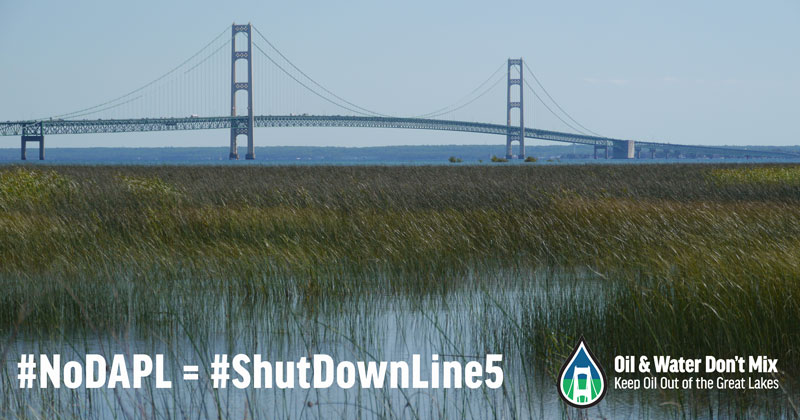 “Line 5 is going to be decommissioned,” said Aaron Payment, Sault Ste. Marie Tribe of Chippewa Indians Chairperson. “The only question is whether it happens before the pipeline ruptures in the Straits, or after it ruptures — leaving us with a catastrophe that will devastate our way of life.”

Like Enbridge’s Line 5 in Michigan, the Dakota Access Pipeline was slated to cross through a critically important waterway that is a drinking water source. In Michigan, the waterway is the Great Lakes. Payment’s Sault Ste Marie Tribe of Chippewa Indians is one of five tribes with federally recognized sovereign rights within the Straits. Eleven tribal organizations, 61 Michigan counties, cities, and townships have passed resolutions calling for the state to stop the flow of oil through the Straits.

"Gov. Snyder and Attorney General Schuette need to end years of dilly-dallying and strongly embrace shutting down Line 5 in the Straits as the only alternative for protecting the Great Lakes and our drinking water.” - David Holtz, Sierra Club Michigan Chapter Chair

A University of Michigan study said an oil spill in the Straits could impact up to 700 miles of Great Lakes coastline, including drinking water in St. Ignace, Mackinac Island and Alpena. Up to 23 million gallons of oil flow through Line 5 in the Straits each day.

You can Take Action Now to let Michigan officials know that now is the time to prevent a disaster in the Great Lakes.

“The State of Michigan’s fiduciary role to protect our public waters is analogous to the federal government’s trustee role to protect sovereign tribal rights. They are paramount to private interests like Enbridge,” said Liz Kirkwood, Executive Director of FLOW. “The State and the Army Corps must conduct a comprehensive review of Line 5 and explore alternative routes now because of failing pipeline supports. Waiting another year for the state’s advisory board to complete its studies does not comply with the law."

Since June 2014, the state has been studying Line 5 while refusing to investigate multiple violations of Enbridge’s easement agreement with the state or taking legal action to decommission the decaying 63-year-old pipeline. The state has twice cited Enbridge Energy Partners for violating conditions of its easement agreement allowing the pipeline to operate in the Great Lakes. Independent experts, citing at least eight additional violations by Enbridge of the easement agreement, have called on Gov. Snyder to investigate the company’s pipeline operations in the Straits.

“The Army Corps of Engineers is pursuing a common-sense strategy to protect drinking water in North Dakota that should immediately be embraced by Michigan’s governor and attorney general,” said David Holtz, Sierra Club Michigan Chapter Chair. “Gov. Snyder and Attorney General Schuette need to end years of dilly-dallying and strongly embrace shutting down Line 5 in the Straits as the only alternative for protecting the Great Lakes and our drinking water.”