A document on the Enbridge company website shows parts of the Line 5 pipeline's protective coating is missing and damaged in the Straits of Mackinac. 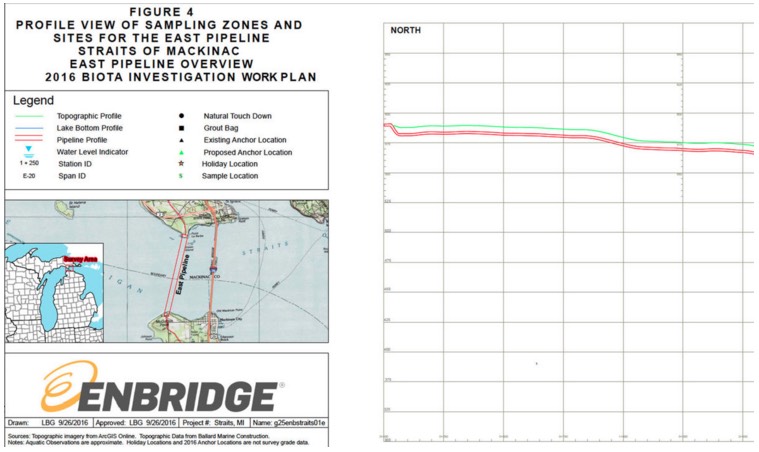 “The reason why this is concerning is because there is specific language in the work plan that talks about areas of the pipeline where there is a loss of coating around the pipe,” McKay said.

She read the 46-page document last week and said these references to portions of pipeline, known as “holidays” need to be addressed.

“It talks about potential areas that are either missing coating or have damaged coating — and there’s even a suggestion that there is potential pipe coatings lying on the lake bed,” McKay said.“The pipeline coating is one of the primary means to prevent external corrosion of the pipeline.”

“If the pipeline coating is considered to be one of the most successful coating systems worldwide (by Enbridge) why is it failing in the Straits of Mackinac? And what does that mean ultimately for the integrity of the pipeline?” - Jennifer McKay - Policy Director Tipp of the Mitt Watershed Council

Line 5, owned and operated by Enbridge Energy, is a twin pipeline that separately carries both light crude oil and natural gas liquids from Canada through the Upper Peninsula and the Straits of Mackinac and exits the state near St. Clair.

Enbridge’s Biota Investigation Work Plan document, dated to September 27 of last year, is part of a revised federal consent decree to “conduct measures to prevent spills in the Straits of Mackinac.”

McKay said the consent decree comes through the U.S. Department of Justice after violations by Enbridge in two oil spills in 2010. One spill was in Marshall Michigan near and in the Kalamazoo River, and the other was in Illinois, according to the revised consent decree document dated to mid January.

McKay said since Enbridge has consistently stated how strong and resilient the coating on the pipeline is, missing coating begs the question of how safe the line actually is in light of the new information.

“If the pipeline coating is considered to be one of the most successful coating systems worldwide (by Enbridge) why is it failing in the Straits of Mackinac?” McKay asked. “And what does that mean ultimately for the integrity of the pipeline.”

Toward the end of the document, there were 11 points on the east pipeline that were listed as “holiday” locations — also known as coating delamination points where a pipeline's coating is known to be missing.

Most of those points were listed on the South side of that line, and the “holidays” are marked in a graphic with gold stars and highlighted text.

The west pipeline showed seven examples of coating delamination spots — with most toward the middle and southern side of the line, according to the document.

Read the entire article at the Petoskey News