Every 75 feet under the Straits of Mackinac there are supposed to be supports to hold the dual pipeline, known as Line 5, in place. But according to an underwater inspection document from Enbridge Energy —the pipeline's owner and operating company, those supports have exceeded the length requirements more than 200 times in years past. 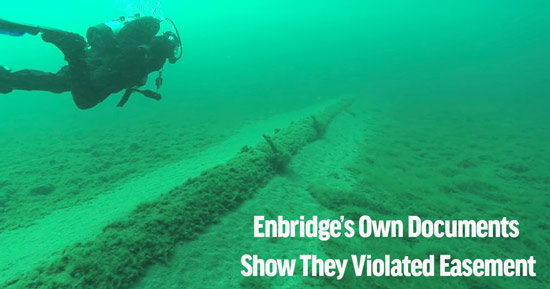 Jennifer McKay, Tip of the Mitt Watershed Council policy director and a member of the Michigan Pipeline Safety Advisory Board, said the document shows the company to have been in violation of its easement agreement.

“Enbridge, since 1953 was supposed to have no (span) areas greater than 75 feet and if you look there’s a number — a quite substantial number — of spans that violated that requirement,” McKay said. “It means that Enbridge has essentially, at least according to the spreadsheet — been operating the pipeline in violation for a number of years.”

Line 5 is a twin pipeline that separately carries both light crude oil and natural gas liquids from Canada through the Upper Peninsula, Straits of Mackinac and Lower Peninsula, crossing out of the state to Ontario, Canada, beneath the St. Clair River.

The document resides in a collection of information requested by the state of Michigan after the attorney general, Michigan Department of Natural Resources and Michigan Department of Environmental Quality learned in February of documented examples of coating issues on the lines under the Straits in Enbridge’s Biota Investigation Work Plan dated to September 2016.

"Enbridge has essentially, at least according to the spreadsheet — been operating the pipeline in violation for a number of years.” - Jennifer McKay, member of the Michigan Pipeline Safety Advisory Board

The 75-foot span regulation was a safety measure included in the original agreement, McKay said.

“So the question then becomes since it’s been operating essentially in violation of that safety measure, what was the actual impact to the integrity of the pipeline?” McKay said.

According to the Underwater Inspection spreadsheet document, most of the spans over 75 feet were listed from 2005 to 2010 with some still in 2012.