Minnesota regulators on Thursday gave the go-ahead for a $160 million upgrade to an Enbridge crude oil pipeline across northern Minnesota that will surely exacerbate a changing climate. 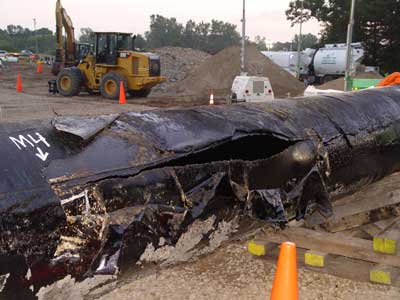 The Alberta Clipper pipeline was constructed four years ago, but the approved upgrade to the pipeline will add pumping stations to increase its capacity from 570,000 to 800,000 barrels per day. The pipeline will transport diluted bitumen, a.k.a. "dilbit" - which is the toxic tar sands oil. Over 1 million gallons of dilbit was spilled into the Kalamazoo River by Enbridge in 2010.

Despite the fact that massive amounts of carbon dioxide will be dumped into the atmosphere courtesy of the new expansion, union pipe fitters, engineering and construction groups, electric utilities and the Minnesota Chamber testified that the expansion would create more jobs, increase taxes, and provide a safer, more reliable and less expensive method of shipping oil than using trains. Good for them.

"Extracting, transporting and burning more fossil fuels will only make climate change worse, and that it’s already an urgent problem that will 'barrel down upon us.'” - Kathy Hollander, MN350 tar sands leader

Environmental activists led by the climate-change group MN350 and the Sierra Club opposed the project, arguing that it isn’t needed and will result in increased greenhouse gas emissions through expanded extraction of oil from the Canadian tar sands of northern Alberta.

There are solutions to the problems posed by extracting, transporting, and using all these fossil fuels. Find out how here.

Read the entire article from the Minneapolis StarTribune here.