The 62‐year‐old Enbridge oil pipelines running through the Mackinac Straits should be shut down pending a full public review because of structural concerns, including the worry that waste excreted by zebra mussels may have corroded and dangerously weakened the steel pipes, according to a report released today at a Mackinac Island press conference by a team of scientists and engineers. (READ THE REPORT) 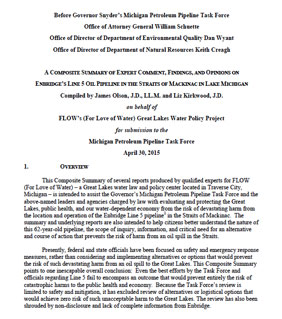 Relying on 1950s technology, the twin oil pipelines also have an outdated protective coating and welds connecting the 40‐foot segments that make up the pipelines, and lack the required number of supports to secure the pipes in the powerful currents of the Straits, just west of the Mackinac Bridge, according to the expert team, which was convened by a Great Lakes law and policy group.

“Studies have concluded that excrement from zebra mussels has a corrosive impact on exposed steel,” said Gary Street, former Director of Engineering, Dow Environmental–AWD Technologies, who spoke at the press conference on behalf of the expert team. “And there’s a real concern that bare steel indeed may have become exposed due to friction where the pipelines lie on the shifting sand‐and‐gravel bottom, and due to possible failure of the pipeline coating generally after more than six decades of use.”

The Enbridge “Line 5” oil pipelines were installed in 1953 and not designed to withstand impacts from zebra mussels, an invasive species carried to the Great Lakes in the ballast water of ocean‐going ships decades after the St. Lawrence Seaway was opened to navigation in 1959, the expert team concluded. Underwater video footage (here at the 2:22 mark) captured in 2013 shows the Straits of Mackinac pipelines covered in growth and debris, including zebra mussels. Moreover, unless removed, a process itself that could compromise the pipelines, the encrusted layer of mussels makes external inspection virtually impossible, the experts determined.

The team of experts also found that the “coal tar enamel” coating that protects the exterior of the Line 5 pipelines from corrosion is an “obsolete technology and may have failed locally, resulting in corrosion that has reduced the strength of the assembled pipeline.” Protective coating similar to that on the Straits pipelines has failed elsewhere and resulted in oil spills, including in 2009 with Enbridge’s Line 2 near Odessa, Saskatchewan, which was constructed the same year as Line 5.

“This type of protective coating is not used on oil pipelines anymore because it is prone to failure and has been replaced by better technology,” said Ed Timm, PhD., PE, a former senior scientist and consultant to Dow Chemical’s Environmental Operations Business. “Enbridge simply has not provided data to back up its claims about the safety of Line 5 in the Straits. There should be a full public review relying on independent expertise.”

The expert team – two accomplished engineers and a hazardous materials risk‐management specialist – were convened by FLOW, a Traverse City‐based Great Lakes law and policy center to consider risks to the Enbridge oil pipelines. Enbridge, which is infamous its Line 6b that corroded and spilled 1 million gallons of heavy oil in 2010 into the Kalamazoo River watershed near Marshall, Michigan, has withheld key data and reports from public scrutiny, the experts found.

“We convened these experts in order to bring key scientific facts and concerns to light,” said Liz Kirkwood, Executive Director of FLOW, an attorney and leader in a statewide campaign of groups, citizens, businesses, tribes, and local governments calling for the governor to conduct a full public assessment under state law – the Great Lakes Submerged Lands Act – of the potential harm posed by Line 5 in the Straits and identify alternatives to avoid that harm.

Kirkwood’s organization released the experts’ findings at a press conference today on Mackinac Island. Also attending the news conference were Bruce Wallace, board chair of the National Wildlife Federation; Aaron Payment, Tribal Chairman, Sault Ste. Marie Tribe of Chippewa Indians; David Holtz, Michigan chair of Sierra Club and Street. The report was submitted April 30 to the Michigan Petroleum Pipeline Task Force, which has yet to respond.

“It’s clear from these scientific findings that Line 5 should be shut down and an open, public process immediately begun to consider the best way to avoid a catastrophic oil spill into the Great Lakes, home to 20 percent of the world’s fresh surface water. The public has a right to know the risk and to expect leadership from the governor and his task force led by Attorney General Bill Schuette and DEQ Director Dan Wyant,” said Kirkwood, who in late April formally submitted the experts’ findings to the state task force, which is expected this spring to release its recommendations regarding Line 5 and other gas and oil pipelines across the state.

The experts also raised concerns about welds connecting the 40‐foot segments that make up the pipelines, noting that the “welding techniques used for Line 5 in 1953 have proven to be less robust than contemplated” and “have been found deficient.” In their report, they cited 16 Enbridge oil spills reported from 2002‐2010 from pipelines with a coal tar enamel coating similar to that used on Line 5 in the Straits, with the cause of five of those spills was listed as “weld failure” and two others resulting from “corrosion.”

The expert team also found that Enbridge has failed to install as many as 65 supports required by the state to prevent the pipeline from grinding along the bottom, bending, and potentially failing or breaking at its weld points. In June 2014, Enbridge disclosed it was in violation of the state easement for an unspecified number of years by not installing the required supports every 75 feet along the Straits oil pipelines. , Enbridge sought a “maintenance” permit from the state to install more supports on state‐owned bottomlands. To date, Enbridge has installed only 146 supports of any type – a total of 8 grout bags and mechanical supports, 16 grout bags, and 122 mechanical screw anchors – far short of the approximately 211 supports required, the experts concluded.

The aging Enbridge pipelines push nearly 23 million gallons of oil and natural gas liquids a day through the Straits of Mackinac, which the company uses as a shortcut for its Line 5 route from Superior, Wis., to Sarnia, Ontario. A July 2014 study by the University of Michigan called the Straits “the worst possible place for an oil spill in the Great Lakes" and depicted the prospect of a plume from a million‐gallon oil spill in the Straits stretching for 85 miles – from Lake Michigan’s Beaver Island to Mackinac Island to Rogers City down the Lake Huron shore.

Mayor Margaret Doud of Mackinac Island, the mayors of Traverse City and Grand Rapids, and most recently, the Cheboygan County Board of Commissioners have sent formal letters to the governor calling for state action on the oil pipelines in the Straits of Mackinac.