When she campaigned for governor Gretchen Whitmer told Michigan voters she would decommission Line 5 and get the oil out of the Great Lakes.  It was her Great Lakes policy version of Fix the Damn Roads.  Clear, concise and understood by voters.

There’s only one way for her to keep that promise: join Attorney General Nessel’s legal action against Enbridge next week and direct her administration to block Enbridge's attempts to keep Line 5 as a more or less permanent threat to the Great Lakes, our economy and Native American treaty rights in the Mackinac Straits. 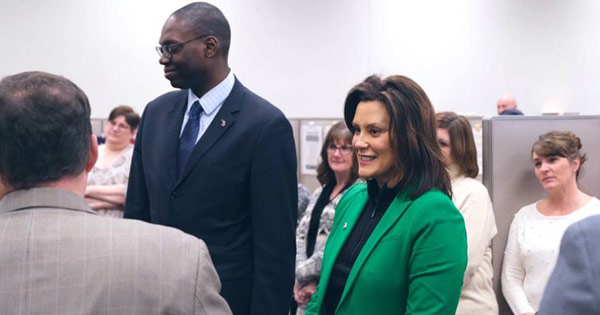 On a political level, it appears on the surface to be a tough choice for Whitmer.   One of her top financial backers—the fully employed and cash-flush trade unions—want to keep Line 5 operating.   You know, jobs, jobs, jobs.  Never mind that Michigan has a documented shortage of skilled trades workers that could threaten existing big construction projects like the Gordie Howe Bridge and Soo Locks from being completed on time.

Pressure to protect the Canadian oil transport giant is also being applied by the Canadian government, and Ohio’s Republican governor wants Whitmer to keep the Line 5 oil flowing to its Toledo refinery.  And, of course, the too-powerful Michigan Chamber of Commerce is backing Enbridge’s interests to the hilt.

But all that’s just so much political noise compared to the potential blowback Whitmer would receive if she decides to cave to those interests and what results is the entirely too imaginable Line 5 pipeline rupture.

There’s every indication that Nessel will move ahead next week and counter Enbridge’s suit against the state aimed at keeping the backroom deal they won from former Gov. Snyder in place.  If Enbridge wins that legal case it doesn’t necessarily mean they will build an oil tunnel.  But it does mean they can operate Line 5 indefinitely, leaving it pumping 23 million gallons of oil a day through the Straits of Mackinac.

The best way to keep that from happening is for Gov. Whitmer to join Nessel’s suit and not tie one hand behind the attorney general’s legal back by refusing to protect the Great Lakes from a bad deal.  The best thing each of us can do is let the governor know that we expect her to keep her word and protect the Great Lakes.