The Bad River Band of Lake Superior Chippewa filed suit against Enbridge today to force the decommissioning and removal of the Line 5 pipeline, which runs across 12 miles of sensitive habitat in the Bad River Reservation. This litigation follows a failed multi-year mediation process with the company and is necessary to force the Canadian-owned company to comply with its legal obligations to decommission and remove the 66-year-old pipeline from the Bad River watershed. Enbridge has continued to operate the pipeline for six years since easements allowing it to maintain the Reservation right-of-way expired in 2013, and today’s action seeks to bring the company’s unauthorized presence to an end. 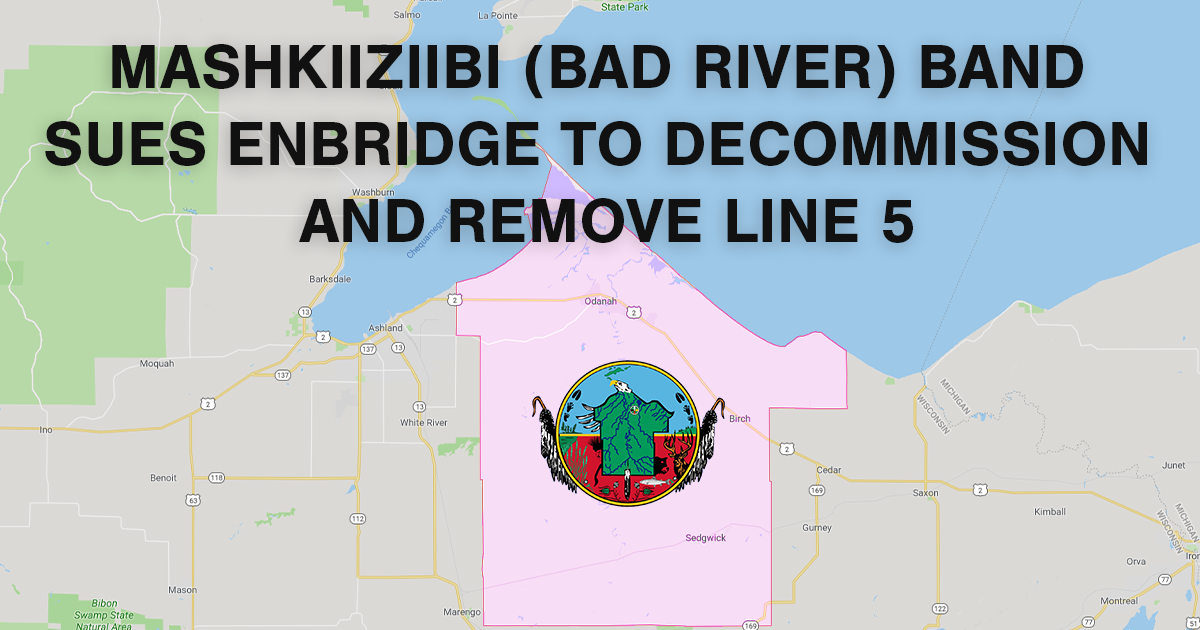 “Governor Whitmer please take note: today the Bad River Band of Lake Superior Chippewa in northern Wisconsin provides powerful lessons for anyone in Michigan contemplating a Line 5 oil tunnel deal with Enbridge. Lesson #1: if you want to protect Michigan’s waters don’t count on good faith bargaining or help from Enbridge. Second important lesson: The only effective way to deal with Enbridge—whose track record for transparency, truthfulness, and safety in Michigan is dismal—is to exercise your legal rights and responsibilities for protecting what you value, which in the case of both Wisconsin and Michigan is water and a way of life.

“Enbridge, it is clear from its lengthy attempt to delay the Bad River Band from exercising its legal rights, will try and drag out any talks for as long as possible unless they get a deal on their terms. For the Bad River Band that was six years of unauthorized operation of Line 5 and two years of failed mediation. Meanwhile, Line 5 threatened the Bad River while Enbridge continued making oil profits. For Michigan, accommodating Enbridge means keeping Line 5 as an unacceptable threat to the Great Lakes and 400 other waterways with potential oil spill damages to the Great Lakes and Michigan in the billions of dollars.

“Today’s development in Wisconsin reinforces the decisions of Attorney General Dana Nessel to act on behalf of the people of Michigan to decommission Line 5 in the Straits of Mackinac and the governor’s move to block the backroom deal her predecessor gave Enbridge that would leave Line 5 as an unacceptable threat to the Great Lakes and 400 other Michigan waterways.”