On Thursday, Enbridge changed course and instead of its original 7-10 year timeline said it could build a tunnel through the Straits by 2014. Oil & Water Don't Mix responds.

As we have seen time and again since their disastrous Michigan oil pipeline rupture in 2010, Enbridge will say and do anything to keep their deteriorated, dented oil pipeline in the Great Lakes for as long as they can. The difference is that the company now confronts, in Dana Nessel, a Michigan attorney general determined to put the interest of Michigan, its people and the Great Lakes above that of a Canadian oil transport giant and Enbridge’s executives and shareholders.

Any Line 5 tunnel construction is certain to take many years. Up until yesterday, Enbridge’s own geologists—along with oil industry experts—said it would take 7 to 10 years to construct a tunnel in the Straits of Mackinac. Now, facing a deadline from state officials, Enbridge has miraculously shortened that fictional timeline to 5 years. Even Enbridge’s press statement hedges this claim with legalistic clarifications that make it clear the company is not committed to this new claimed timeline. 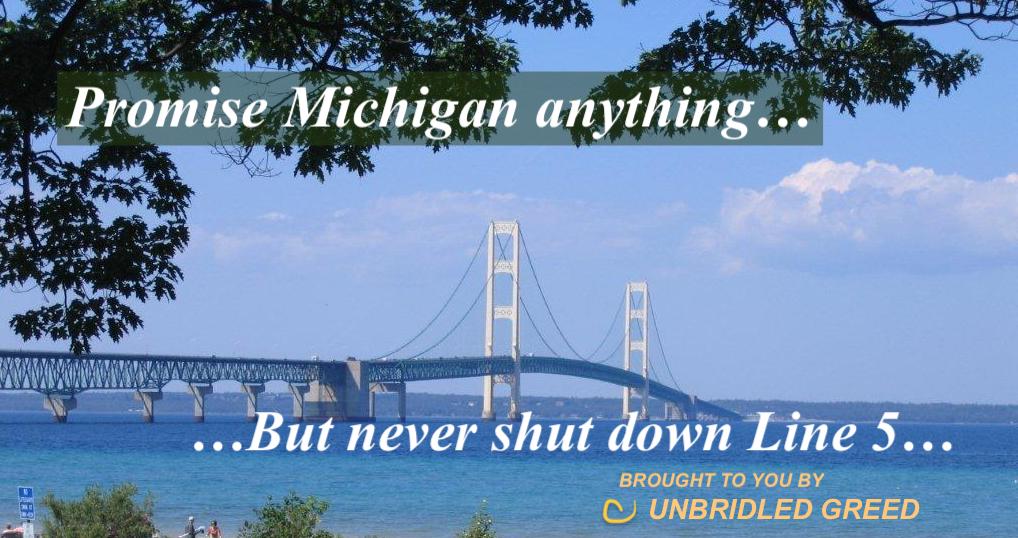 There is no future for the 66-year-old Line 5. And any oil tunnel construction is certain to be delayed for years by environmental reviews, lawsuits and legal interventions. Just this week, the Anishinaabek Caucus of the Michigan Democratic Party issued a statement in solidarity with the 12 tribes of Michigan and the Chippewa Ottawa Resource Authority, affirming its opposition to the tunnel and asserting sovereign treaty rights. Moreover, time and again, Enbridge has failed to keep agreements it has made or deadlines it promised to meet.

Even if an oil tunnel could be safely built overnight (Enbridge’s next fictional construction timeline?), Line 5 would still pose an unacceptable risk to the Great Lakes and 400 other waterways along its 547-mile path through Michigan. And as national climate leader Bill McKibben recently pointed out, why should Michigan help Enbridge build a Tar Sands tunnel to help a Canadian fossil fuel corporation? That’s not the kind of climate legacy Gov. Gretchen Whitmer will want future generations to ponder.

Now, facing a deadline from state officials, Enbridge has miraculously shortened that fictional timeline to 5 years.

As she engages in talks with Enbridge, Gov. Whitmer should consider whether she wants to be the Line 5 oil tunnel governor. Or does she want to be the governor who will be remembered for standing up to Enbridge and ensuring future generations will have a clean Great Lakes and a healthy climate?

The best course for state officials to take is to immediately begin the process of decommissioning Line 5. If Enbridge actually wants an oil tunnel, let them apply separately under the legally required process and protections of the Great Lakes Submerged Lands Act and public trust law. But Enbridge must first shut down their dangerous pipeline. Then talk.