Michigan Senate Republicans today will resume a series of attacks on Gov. Whitmer's action to protect the Great Lakes from Line 5 oil pipelines by hosting a national oil and gas industry front group leader masquerading as an Ohio consumer advocate. just two days after one Republican said an award-winning Michigan business and jobs provider should take its trucks off the state's roads.

Today's Senate Energy & Technology Committee hearing on Line 5 is scheduled to focus on Enbridge's Ohio advocates, including Chris Ventura, Midwest Director of the Consumer Energy Alliance, with ties to the Canadian tar sands industry, BP, Marathon, ExxonMobil, and Shell, according to the Center for Media and Democracy. The watchdog group says Consumer Energy Alliance is an oil industry front group that "is part of a sophisticated public affairs strategy designed to manipulate the U.S. political system by deluging the media with messaging favorable to the tar-sands industry..." 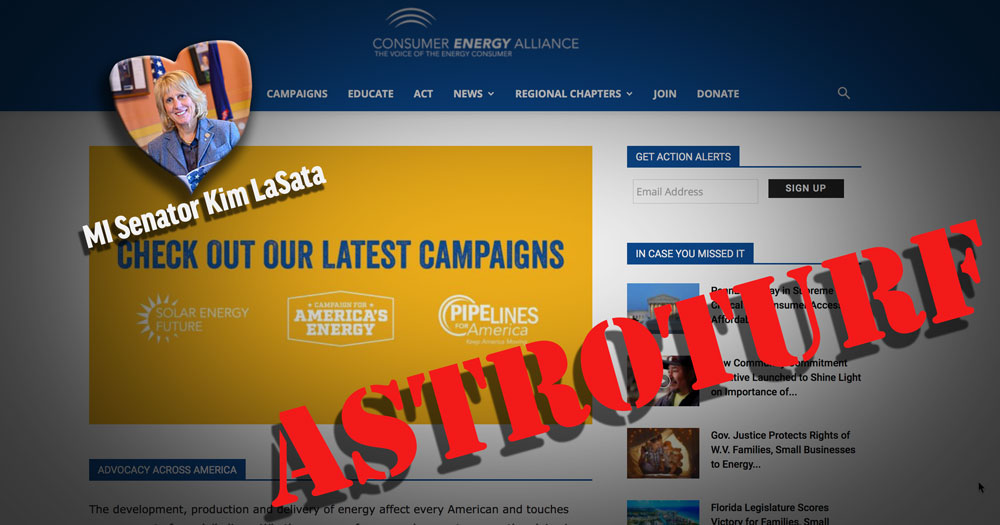 "Instead of working to protect Michigan jobs and the Great Lakes, Senate Republicans are prioritizing Ohio businesses and the Canadian oil industry's astroturf friends," said Christy McGillivray, Michigan Legislative and Political Director for Sierra Club. "Every day oil flows through Line 5 in the Straits of Mackinac is another day we risk incredible environmental and economic disaster for the entire state. Supporting Gov. Whitmer's proactive plan to defuse this ticking time bomb should be the top priority of Michigan's elected representatives."

"I wish Mr. (Bell) were here because I would like to ask him if he could take his trucks off the road, because I drive on 94 every day and the risk of me getting into an accident with those trucks is ridiculous," - Senator LaSata

"I wish Mr. (Bell) were here because I would like to ask him if he could take his trucks off the road because I drive on 94 every day and the risk of me getting into an accident with those trucks is ridiculous," said LaSata.

Bell, who supports the governor's plan to decommission Line 5 in the Straits, was planning to submit written testimony to the committee after receiving an 11th-hour invitation to testify. Bell's Brewery employs 600 workers in Kalamazoo and Escanaba, in the Upper Peninsula. His beer and business have received numerous awards.

LaSata was elected to her first senate term in 2018 with financial support from the oil and gas industry, according to campaign finance records on file with the Michigan Secretary of State.

Tuesday, LaSata touted Enbridge's safety measures, claiming if Line 5 ruptured Enbridge would be able to respond quickly. In 2010 it took Enbridge 17 hours to shut down its Line 6B along the Kalamazoo River, resulting in nearly 1 million gallons of oil being spilled that required a $1.2 billion cleanup effort. A University of Michigan study said a Line 5 failure could impact 700 miles of coastline, with the pipeline being located in the "worst place" for a Great Lakes spill.

"Enbridge spilled a million gallons of oil in the Kalamazoo River after violating the law and claiming their faulty pipeline was safe," said Sean McBrearty, Oil & Water Don't Mix campaign coordinator. "Line 5 is damaged, dangerous and old and Enbridge has shown time and again they cannot be trusted."

Sen. LaSata remarks at the April 27 Energy & Technology Committee hearing begin at 44:18 of this video recording.