A Line 5 oil spill could deliver a blow of over $6 billion in economic impacts and natural resource damages to Michigan’s economy, according to a study commissioned by FLOW. 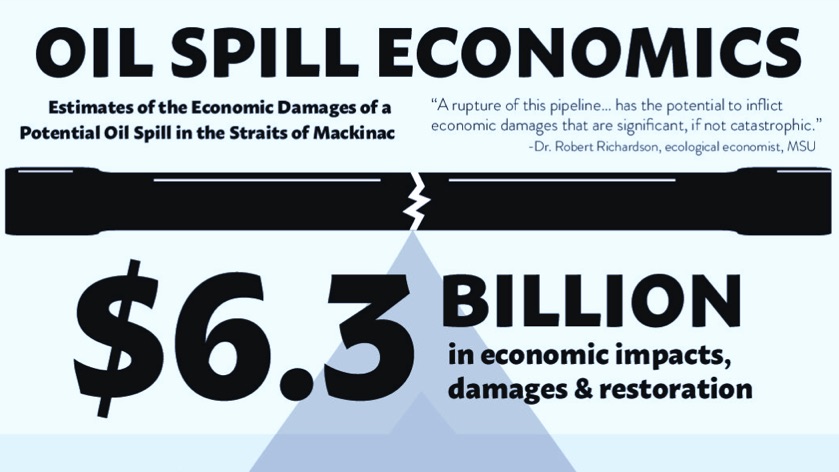 Conducted by nationally respected ecological economist Dr. Robert Richardson of Michigan State University, the study for the first time adds up potential costs of a Line 5 spill into the Straits of Mackinac and adjoining waters under a realistic – but not worst-case – scenario.

“This study puts credible numbers behind what common sense tells us, that a Line 5 spill could cause catastrophic economic impacts in addition to environmental destruction. It’s another compelling reason for the state to take swift action to shut down Line 5,” said Liz Kirkwood, Executive Director of FLOW.

“The recent anchor strike on Line 5 should be a wake-up call that this crippling blow to our tourism economy is not hypothetical,” Kirkwood added. “It is real and it could happen at any time.”

The report’s estimates are likely conservative. The study does not depict a worst-case spill. It assumes the spill would take place during ice-free months under conditions favorable to response. A worst-case scenario would involve a prolonged spill of greater magnitude and broader geographic range, reaching into Georgian Bay, Saginaw Bay and other waters. The report does not estimate impacts to the shipping sector, costs of evacuation, and impacts on Canadian shorelines and economic sectors.

“A spill from Enbridge's Line 5 could contaminate nearby municipal drinking water intakes, devastate some of the commercial, recreational, and tribal fisheries of the Great Lakes, kill aquatic and terrestrial wildlife, impair critical ecosystem services, diminish coastal property values, and tarnish the image of the state of Michigan and perceptions of its high levels of ecological integrity,” the study says. Even bigger impacts would damage Michigan’s critical tourism industry, the study finds.

The study estimates $697.5 million in costs for natural resource damages and restoration and more than $5.6 billion in total economic impacts, including: