Mackinac Island, MI-- Dozens of citizens from across the Great Lakes State snaked through the heart of this iconic island in giant black and white No Line 5 Oil Tunnel shirts in a robust demonstration today against Enbridge’s proposed Line 5 oil tunnel.

A three-block long line of demonstrators occupied sidewalks and lanes with business, political leaders and corporate lobbyists gathered for the annual Mackinac Policy Conference, concluding the protest at the Grand Hotel, site of the Mackinac Policy Conference. As demonstrators protested Line 5, Attorney General Dana Nesse issued an end of June deadline at the conference for Enbridge to reach an agreement with Gov. Whitmer on the future of a proposed Line 5 oil tunnel. Nessel said absent a tunnel agreement by the deadline she will act to shut down the dangerous oil pipeline. 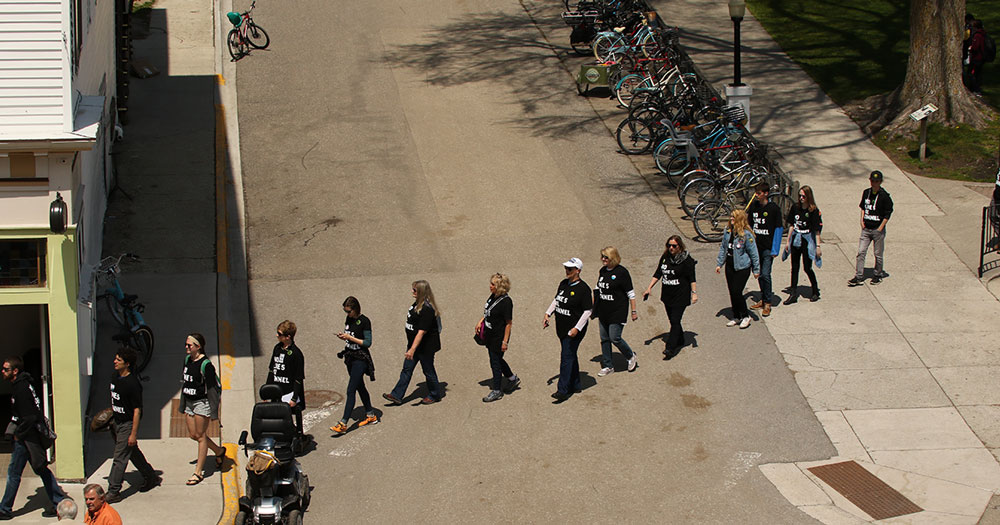 Mackinac Island is ground zero for an oil pipeline rupture and today's developments come as the Trump administration this week ratcheted up the Great Lakes oil spill threat by seeking to block a federal court from requiring changes to Enbridge's flawed Line 5 oil spill recovery plan for the Great Lakes.

“Gov. Whitmer promised to decommission Line 5 and we are here with her on the island today to remind her that our future--Michigan’s future--is just one pipeline rupture away from disaster.” - Leonard Page, Cheboygan resident

“Our message to the governor and the state’s other political leaders is that it’s past time to shut down this dangerous pipeline in the Great Lakes,” said Sean McBrearty, Oil & Water Don’t Mix coordinator. “Until you stop the flow of oil through the Straits of Mackinac this beautiful island you are calling home for a few days this week is living on borrowed time.”

The City of Mackinac Island has called for the dangerous oil pipelines to be shut down while Gov. Gretchen Whitmer says she is negotiating with Enbridge to possibly keep the pipelines operating in the Straits.

Demonstrators, who heard from Indigenous and political speakers during the march, oppose Enbridge’s proposed tunnel because it will not eliminate the risk of a Line 5 oil pipeline. The aging pipeline, built in 1953, would remain at the bottom of the Straits and vulnerable to continued deterioration, anchor strikes and other threats to its integrity during the 7-10 years it took to drill through the Straits to construct a tunnel. Moreover, the 645-mile long pipeline crosses nearly 400 Michigan waterways as it transports 23 million gallons of oil to a refinery in Sarnia, Ontario for use by Canada.

"Gov. Whitmer has a unique opportunity to follow the science and create a solution to the climate crisis by shutting down Line 5 now before a tunnel locks us into decades more of dirty energy that our state and children cannot afford to endure." - Bill Latka, TC350

“Enbridge’s oil is all threat and no reward for Michigan and putting it in a tunnel still leaves the Great Lakes vulnerable to a Line 5 pipeline rupture,” said Leonard Page of Cheboygan who was among today's demonstrators. “Gov. Whitmer promised to decommission Line 5 and we are here with her on the island today to remind her that our future--Michigan’s future--is just one pipeline rupture away from disaster.”

When the product in Line 5 makes its way to refineries and is burned, it spills carbon into our atmosphere every day.

“The world’s scientists warn us that we have only 11 years to cut our carbon emissions in half to avoid the worst consequences of an overheating planet,” said Bill Latka with TC350, a local chapter of 350.org. “Gov. Whitmer has a unique opportunity to follow the science and create a solution to the climate crisis by shutting down Line 5 now before a tunnel locks us into decades more of dirty energy that our state and children cannot afford to endure.”

“Pivoting towards the green infrastructure and jobs of the future by moving away from disastrous polluting fossil fuel infrastructure is a concrete step that Governor Whitmer can take towards her pledged commitment to put climate change at the heart of our state government,” said Christy McGillivray with the Michigan Chapter of the Sierra Club. “Climate change has set a deadline for us--the time to act on investment in a clean energy future is now.”

The Detroit Regional Chamber of Commerce’s Mackinac Policy Conference is the biggest event of the year on Mackinac Island, attracting the state’s business and political leaders and a national spotlight. Enbridge is one of the event's sponsors.