Read the news roundup reporting on the successful Line 5 Retirement Party, where over 30 locations joined in on the livestream from the Traverse City Opera House. 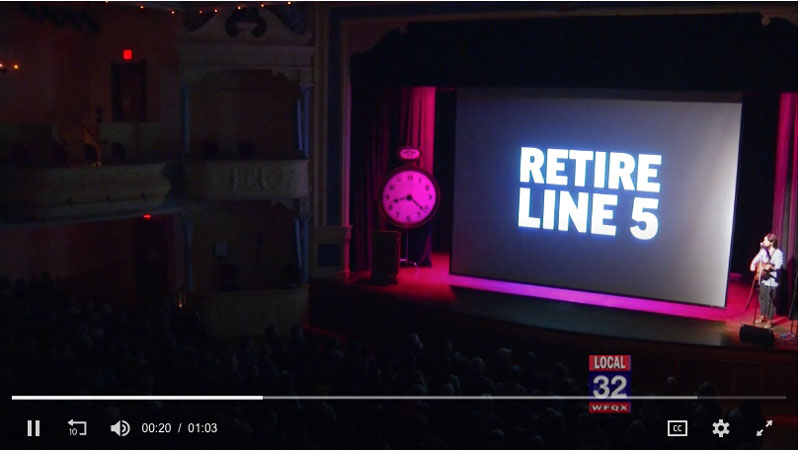 Hosted by “Oil and Water Don’t Mix,’ this event was meant to spread awareness on the pipeline through speakers, videos and musical acts. This was one of more than 30 retirement events held in the state and across North America.

Retirement party for 'Line 5' from Enbridge
Fox17
GRAND RAPIDS, Mich. – Enbridge's Line-5 pipeline that runs under the Straits of Mackinac has been a point of contention with protesters and environmentalists for years. The pipeline turned 65-years-old on Monday, and to mark that date groups across Michigan gathered in an effort to shut the line down ...

Watch the Recording of the Show Now

Group Holds Line 5 Retirement Party in Traverse City
UpNorthLive.com
GRAND TRAVERSE COUNTY, Mich., (WPBN/WGTU) -- Enbridge's Line 5, the pipeline that carries crude oil and propane under the Straits of Mackinac, has been a controversial topic from the beginning and one group held a "retirement party" in hopes of bringing even more attention to it. The group Oil ...

Line 5 turns 65 and activists want it retired
WSYM-TV
LANSING, Mich. (WSYM) - The controversial pipeline beneath the Straits of Mackinacofficially turns 65 years old on Monday. To commemorate, a group campaigning to stop the flow of oil in the line five pipeline will be holding what they are calling, retirement parties. A coalition of organizations called ...

Activists host 'retirement parties' for Enbridge Line 5 oil pipeline
MLive.com
TRAVERSE CITY, MI -- A group campaigning to stop the flow of oil through a pipeline stretching from one corner of Michigan to another is hosting a tongue-in-cheek "retirement party" this week for Enbridge Energy's Line 5 pipeline. Oil and Water Don't Mix, a coalition of organizations who oppose the ...

Activists Plan Party To Urge Hoped-For Retirement Of Pipeline In Straits Of Mackinac
WHMI
The event, which will be held Monday the 23rd, is hoping to bring awareness to the aging 65-year-old Line 5 pipeline that carries 22-and a half million gallons of oil underneath the Straits of Mackinac daily. Pinckney resident and environmental activist Terri Wilkerson is organizing the local event. "Those ...