Mackinac Islanders learn of risk to their beloved Island

Approximately 75 people attended a meeting at Mackinac Island City Hall on September 4, 2104 to learn about the existence and implications of twin pipelines lying on the bottom of the Straits of Mackinac.

Every day, nearly 23 million gallons of oil flow through two aging pipelines in the heart of the Great Lakes, just west of the Mackinac Bridge. Built in 1953 during the Eisenhower administration, the two 20-inch-in-diameter “Line 5” pipelines owned by Canadian company Enbridge, Inc., lie exposed in the water at the bottom of the Straits of Mackinac. Enbridge has had 1,068 spills that dumped 7.4 million gallons of oil between 1999 and 2013 -- an average of 71 spills and 500,000 gallons leaked per year. That’s more than one oil spill every week for the last 15 years. 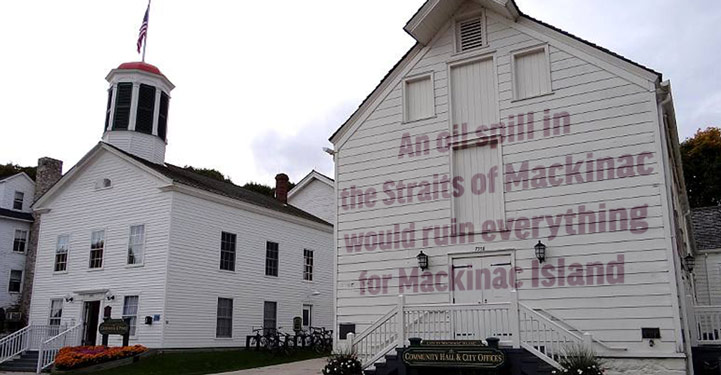 Sobering images emerged during presentations to residents and business owners at Mackinac Island City Hall by the state’s chief oil cleanup official, a University of Michigan professor, and a team of legal and policy experts.

The presentations sketched a chilling portrait of a place accustomed to grandeur: Mackinac Island swallowed by a sea of oil. Passenger ferries and all other boat traffic halted to avoid igniting the spreading oil plume. Drinking water cut off indefinitely to prevent the island’s intake pipes in Lake Huron from sucking up the oil. The whitecaps under the Mackinac Bridge turned black.

There would be no visible cleanup activity by the state in the first hours or perhaps even the first days after the oil spilled, as response crews and equipment arrive from other regions of the country. A few weeks later, there’s the prospect of a million-gallon oil plume stretching for 85 miles – from Lake Michigan’s Beaver Island to Rogers City down the Lake Huron shore. A black stain on the Pure Michigan brand. An economic and environmental disaster at the Straits.

The Mackinac Island audience watched with rapt attention as a University of Michigan animation showed that a pipeline oil spill in the Straits would slosh back and forth with the currents and contaminate broad portions of Lake Michigan and Lake Huron and its shoreline communities, fish, and wildlife.  The shores of Mackinac Island and St. Ignace were awash in oil, their residents and businesses cut off from the source of their drinking water – Lake Huron.

The pipeline has transported crude oil through the Straits of Mackinac without incident until now, but a number of troubling factors are coming together that cause grave concern:

• A recent increase in the volume and pressure of fluids moving through the pipelines
• The tarnished safety record of Enbridge, Inc., the Canadian company that operates the pipeline
• Newly discovered issues of compliance with the contract between the pipeline company and the State of Michigan
• The age, location, and condition of the pipeline
• The lack of transparency about safety inspections and what petroleum products are being transported through Line 5 in the Great Lakes
• The lack of a proactive regulatory environment in Michigan and at the federal level

Read the entire article at FLOW - For Love of Water