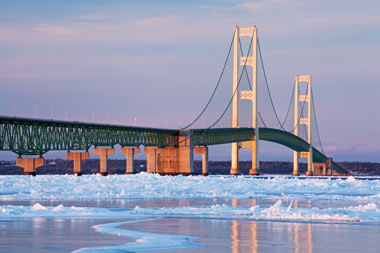 The March meeting of the Michigan Pipeline Safely Advisory Board was attended by more than 250 citizens opposed to the Line 5 pipeline that crosses the Straits of Mackinac. Here is a roundup of news coverage from the meeting.

Enbridge: No unprotected gaps on Straits pipeline, but doubts persist

Enbridge officials on Monday sought to assure the state Pipeline Safety Advisory Board — and an often hostile meeting audience — that the company's twin, 64-year-old, underwater oil pipelines in the Straits of Mackinac do not have missing areas of coating where the bare pipe is exposed, despite an internal work plan that seemed to indicate as much.

"I believe this pipeline is in as good of condition as it was on the day it was installed," Enbridge's director of integrity programs Kurt Baraniecki told the board at its meeting in Lansing Monday, prompting derisive howls and laughter from many skeptics in the meeting audience.

LANSING, MI -- Fred Harrington and his grandson Riley Sargent wanted to make a statement and it needed to have some impact.

So, in the middle of a discussion about public outreach during the Monday, March 13 meeting of the Michigan Pipeline Safety Advisory Board -- which is developing a recommendation on what action, if any, the state should take about the Enbridge Line 5 pipeline under the Straits of Mackinac -- the two slipped into the bathroom, undressed, slathered themselves in chocolate cake batter and returned to their front row seats.

Their theatrics worked. The audience gawked. Cameras turned. Enbridge executives and spokespeople got visibly uncomfortable. Board discussion continued without missing a beat, although all eyes were on the man and boy covered in brown goo.

Lansing – Enbridge Energy on Monday defended the safety of its aging dual oil and natural gas pipelines beneath the Straits of Mackinac, telling state officials that coating issues it identified in a recent report are limited to an external fiber wrap, not the actual coal tar enamel used to protect against corrosion.

Enbridge officials testified before the Michigan Pipeline Safety Advisory Board in Lansing, where protesters repeatedly yelled “shut it down” during a company presentation on the 64-year-old Line 5, which splits in two as it runs beneath important and turbulent waterways connecting Lake Huron and Lake Michigan.

LANSING, Mich. -- About 250 protesters showed up in Lansing at the Pipeline Safety Advisory Board meeting Monday. They expressed concerns about Enbridge Line 5, a major oil pipeline that runs under the Straits of Mackinac.

They said if the 145-mile line were to rupture, it would put all of the Great Lakes at risk.

Environmentalists weren’t just there to protest, they also called on Governor Snyder and Attorney General Bill Schuette to decommission the line. Officials from Enbridge made a presentation that showed how they maintain and inspect the line, including looking for possible corrosion. But they said the exterior material isn’t essential to the pipe’s integrity.

BELLAIRE, MI - Short's Brewing Company announced this week it's joining a coalition of Great Lakes businesses trying to convince state lawmakers to decommission Enbridge's controversial Line 5 - a pair of oil pipelines that run along the bottom of the Straits of Mackinac

With the move, Short's joins other popular craft beer names already in the group, including Bell's Brewery and BarFly Ventures -- the parent company of HopCat and Grand Rapids Brewing Co.

Line 5 carries light crude oil and natural gas liquids from Wisconsin to Sarnia, Ontario. Its underwater crossing in the Straits - and its 63-year age - has created widespread concern for the Great Lakes should a spill occur.