The Michigan Advance--which just won an award for its consistently excellent coverage of the Enbridge Line 5 controversy--published a detailed report Friday calling out a public body created in the lame-duck session of the 2018 Legislature that is supposed to oversee Enbridge's controversial proposed Line 5 oil tunnel.

As the Advance reported, the Mackinac Straits Corridor Authority was created as a three-member panel that's supposed to be the public's watchdog over the tunnel project.  As it turns out, this dog doesn't even bark or hunt let alone bite.  Prior to its meeting last Wednesday, the Corridor Authority hadn't met for 11 months.  Meanwhile, $475,000 in public funds were spent on its behalf hiring consultants.  Moreover, the authority since June has been without one member, who resigned to take another political appointment, and it appears that only one of the two remaining members--Chair Mike Nystrom--has been at all engaged in the project. 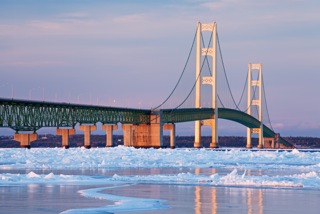 Nystrom's day job?  He's a registered lobbyist for the construction industry and executive vice president of the Michigan Infrastructure and Transportation Association.  So Michigan taxpayers have as their lead watchdog over the tunnel construction project a lobbyist whose job it is to promote the interests in infrastructure projects like the tunnel.

And speaking of oversight, there appears to be little of that going on at the corridor authority board level.  They approved those half-million dollar contracts several months AFTER Nystrom had signed them and the authority's other board member, Tony Englund, did not appear to be involved in the decision, the Advance reported.

One of the casualties of the Corridor Authority's Missing in Action may be a critically important decision on tunnel design--whether it should be open or sealed tight--that was supposed to have been publicly made by the Corridor Authority in an open meeting. At least that's what the authority's lead consultant, Michael Mooney, told them back in March 2020 when asked by authority members who would make the final decision on tunnel design.

At 21:49 of the recorded meeting, Mooney was asked who will make the decision on the tunnel’s final design?

“The decision to leave it open or backfill it will come from you as decision-makers,” Mooney responded.

Instead, Enbridge, with input only from Moody, state agency staff, and other consultants, has plowed ahead with its controversial design, one that an independent tunnel expert, Brian O’Mara, says is much riskier and not what was envisioned in 2017 when a tunnel was first proposed by a team of consultants hired by the State of Michigan to look at alternatives to the existing Line 5.  O’Mara submitted his analysis to the Michigan Dept. of Environment, Great Lakes and Energy, the Michigan Public Service Commission, and the U.S. Army Corps of Engineers.  EGLE recently granted permits for the tunnel but the Army Corps and MPSC must still grant approval before the tunnel can be constructed.

Meanwhile, the Corridor Authority--former Gov. Snyder's idea--limps along and if the tunnel is ever built will eventually own it on behalf of the taxpayers of Michigan who were told by Snyder and Enbridge that it would come at no cost to them. So far the price tag for Michigan taxpayers is $475,000 but that is likely just the beginning of what eventually will come due.