The Michigan Attorney General and Department of Environmental Quality Director report that Enbridge Energy Partners has not fully complied with their Great Lakes bottomlands easement.

The following is republished from the State of Michigan website.

Attorney General Bill Schuette and Michigan Department of Environmental Quality (DEQ) Director Dan Wyant today sent a formal notice to Enbridge addressing the requirement to install additional anchors for two oil pipelines laid in the Mackinac Straits more than sixty years ago. The State's formal notice to Enbridge Energy and Enbridge Pipelines, L.L.C. follows Schuette and Wyant's formal request for information from the companies in April, and is in addition to the recent formation of the Michigan Petroleum Task Force, co-chaired by Schuette and Wyant to examine petroleum pipeline issues more closely.

The notice sent by Wyant and Schuette today responds to Enbridge's acknowledgement that it is currently not in compliance with their agreement with the State of Michigan, which limits the maximum span or length of unsupported pipe in Enbridge's pipelines in the Mackinac Straits.

"Enbridge has not fully complied with the 75-foot support spacing requirement contained in Condition A.(1) of the Easement."

"We have a responsibility to mitigate any risk of serious harm to our Great Lakes," said Schuette. "If we see evidence that something isn't quite right with the infrastructure that lies beneath them, we're going to address it with every tool available. We 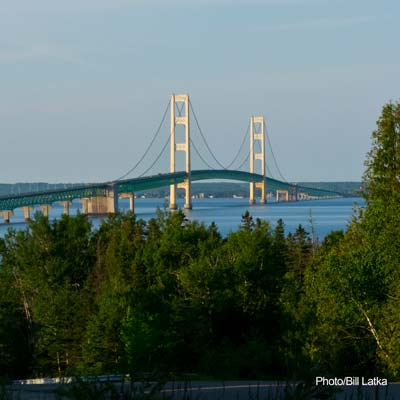 will insist that Enbridge fully comply with the conditions of the Straits Pipeline Easement to protect our precious environmental and economic resources and limit the risk of disaster threatening our waters."

"The Great Lakes are our greatest natural resource assets, and we must do all we can to protect them," Wyant said. "Installing additional pipeline supports means additional protection, and we look forward to Enbridge completing this work quickly."

The letter signed by Schuette and Wyant on behalf of the State addresses the easement agreement with the State of Michigan that allowed the construction and operation of the Enbridge Straits Pipelines in 1953. The agreement requires pipeline supports at least every 75 feet to ensure the stability of the pipelines running along the lake bed.

Enbridge recently acknowledged in their June response to an information request from Schuette and Wyant that some portions of the pipelines do not meet that requirement. The company noted it intends to install additional supports this year so that they would be spaced an average of 50 feet apart.

Ongoing Conversation with Enbridge to Protect the Great Lakes

On April 29, 2014, Schuette and Wyant made a formal request for detailed information from Enbridge Inc. and Enbridge Pipelines Inc. regarding two Enbridge oil pipelines laid in the Straits of Mackinac more than 60 years ago.

The letter signed by Schuette and Wyant asked for detailed information about the Enbridge pipelines within 60 days, including:

On June 27, 2014, Enbridge responded to the State's request for information and that response is still under review.

Today's formal request for action on the spacing of pipeline anchors is an important first step in ensuring the Great Lakes are protected from a potentially catastrophic spill in the event of a pipeline failure.

Last month, Wyant and Schuette announced they will co-chair a multi-agency government task force to take a close look at pipelines transporting petroleum products around the state.

Formal oversight for interstate gas and oil pipelines comes from the federal Pipeline and Hazardous Materials Safety Administration. But the vast network of lines transporting petroleum products over and under Michigan has the potential to impact Michigan's environment and communities.

Additional topics the group will address include: