MDEQ, Attorney General Give Public Just 5 Days To Comment on Documents That Will Determine the Future of Enbridge Line 5 in the Straits

A coalition of community groups, organizations and businesses concerned with the threat of Enbridge Energy Partner’s Line 5 through the Straits of Mackinac today criticized the Michigan Department of Environmental Quality and the Attorney General’s office for giving the public less than a week to examine crucial documents that will be used to decide the future of the controversial oil pipeline. The Oil & Water Don’t Mix coalition is asking the state to extend the time for public comment to 30 days.

At issue are more than 20 pages of documents called Independent Risk Analysis for Enbridge Line 5 and Independent Alternatives Analysis to Enbridge Line, which Michigan Attorney General Bill Schuette and the MDEQ announced Monday along with a deadline of Friday for public comment. The documents will be used in the hiring of consultants to undertake the studies and examine alternatives to Line 5 in the Straits. 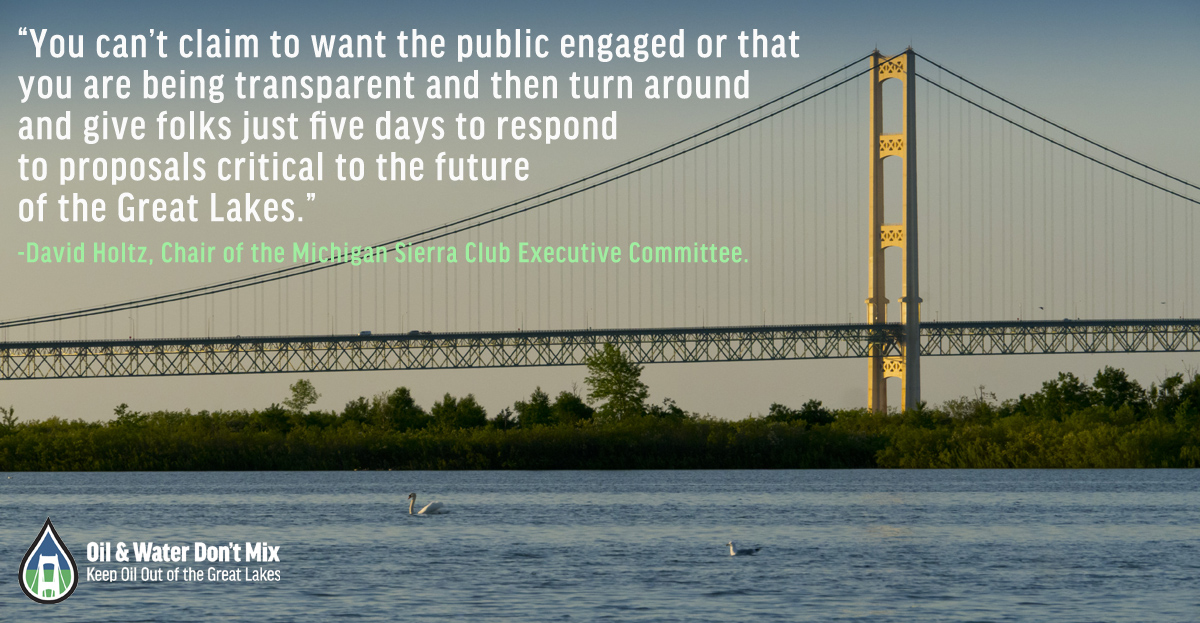 “You can’t claim to want the public engaged or that you are being transparent and then turn around and give folks just five days to respond to proposals critical to the future of the Great Lakes,” said David Holtz, Chair of the Michigan Sierra Club Executive Committee. “These documents will determine what is on the table and what isn’t when it comes to decisions about the future of Line 5. Enbridge and other insiders have had these documents for many weeks. We think the public should have the same opportunity as the oil industry to weigh in on them.”

Sierra Club is one of 24 organizations that have endorsed the Oil & Water Don’t Mix coalition’s goal of ending the flow of oil through the Straits and keeping oil out of the Great Lakes.The coalition also has the support of more than 200 businesses and 15 local governments.

"What happens with these documents will affect the lakes for generations to come, and Michiganders deserve a fair chance to have their say.” - Lynna Kaucheck, Senior Midwest Organizer for Food & Water Watch

“The health of our Great Lakes hinges on decisions about Line 5,” said Lynna Kaucheck, Senior Midwest Organizer for Food & Water Watch. “That means the future of drinking water, jobs and Michigan’s tourism industry does too – all of which are central to the lives of everyone who lives in this state. What happens with these documents will affect the lakes for generations to come, and Michiganders deserve a fair chance to have their say.”

The OWDM coalition has called on the state to immediately halt the flow of oil through the Straits while a state Pipeline Safety Advisory Board examines alternatives, which is expected to take months if not years to complete.

“It seems the state is trying to rush these documents through because they rightly recognize the urgency of dealing with the Line 5 threat,” said Liz Kirkwood, executive director of FLOW. “We agree there’s an urgent need to eliminate the risk to the Great Lakes from Line 5. That’s why we think it’s prudent to stop the flow of oil through the Straits now and undertake a thorough, comprehensive review of permanent alternatives. Short-changing that by cutting out the public’s role isn’t likely to lead to a good outcome for the people of Michigan.”

“We are glad to see that decommissioning Line 5 through the Straits is one of the alternatives being studied,” said Kate Madigan of the Michigan Environmental Council. “Michigan’s future is reliant on the health of the Great Lakes, and the state’s primary responsibility here is to protect the Great Lakes, our public health, drinking water supplies and economy from a catastrophic oil spill.”